How To Be An #AwesomeRunner 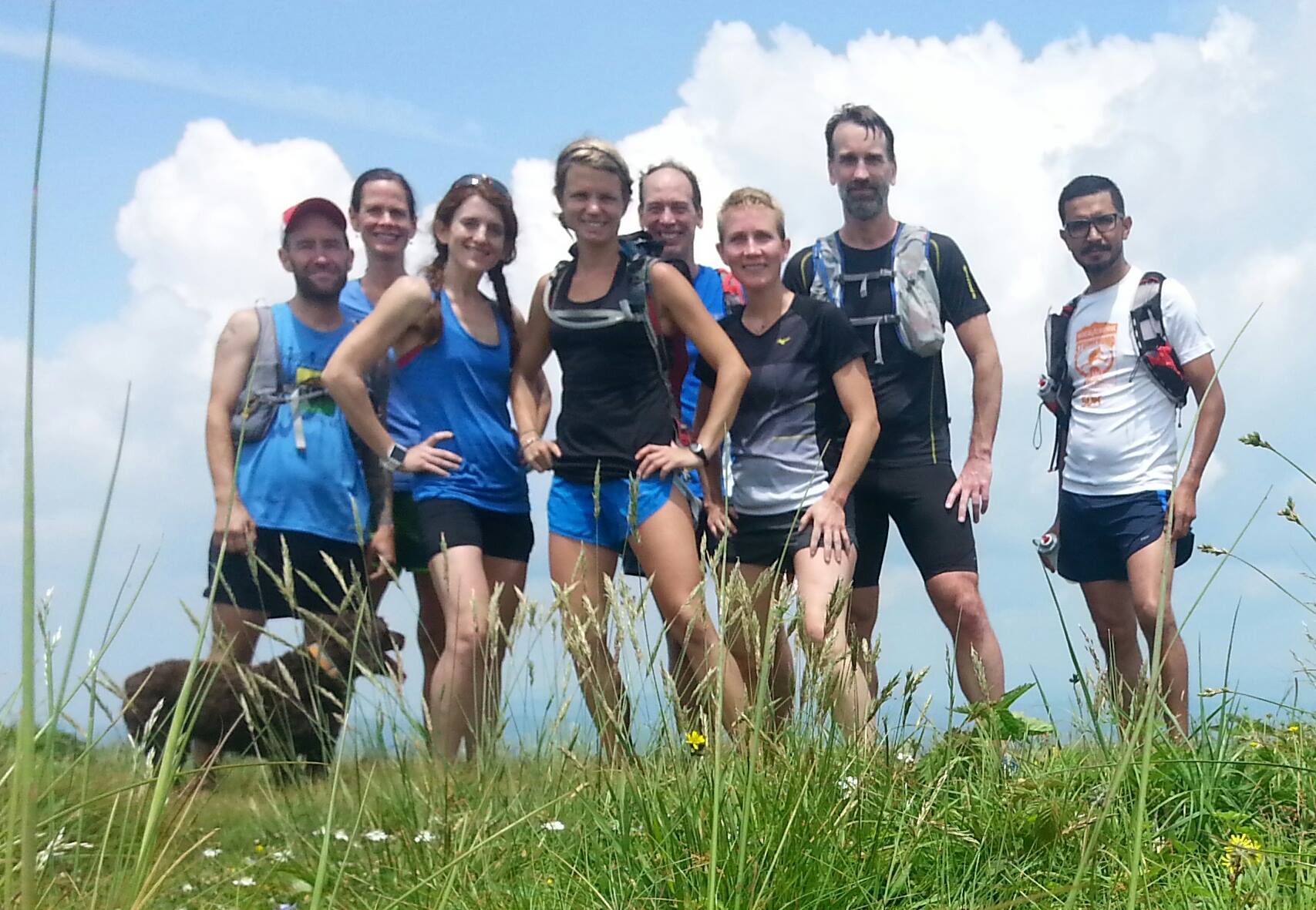 If you’re not feeling like an awesome runner these days, it’s time for a change.

Or we’ll go for a long run and for whatever reason, we feel like we need to stop and take a quick break, maybe get a drink of water or just take a breather.  And instead of celebrating that we went on a long run that, let’s face it, the vast majority of the world does not do, we’ll say something like, “yeah, but I had to stop in the middle and catch my breath.”  And then we will ruminate ourselves into a big downward spiral of negative thoughts about our running, our fitness, and our self worth.  All because we stopped for 5 seconds on a ten mile run.

The list of examples of negative self talk in running goes on and on and on.  Our splits at the track aren’t good enough.  We didn’t get a personal record at the race.  We go on vacation and feel guilty about having a tropical drink and not sticking to the running schedule.

A Little Negativity Can Be Motivating

Now, in some respects, the typical runner negativity can actually be motivating.  When you try hard at something and then just barely miss the mark, it can be incredibly powerful.  I know this first hand when I was gunning for a sub-three hour marathon and crossed the finish line at a devastatingly close 3 hours and 29 seconds.  Thirty seconds separated me from my dream goal and you better believe that I stopped at nothing to crush that goal at my next race a few months later.

I wanted to be awesome at running marathons and my personal definition of that was a sub-three at the age of 42.  I am super proud of that accomplishment because it was my personal Mt Everest.  I had set my sights on that goal years earlier and chipped away at it twice a year until I got there.

Are there faster runners than I am?  Of course!  I’m not even the fastest runner in my town, let alone the state, the country, or the world.  If I wanted to feel bad about myself and my running, I could easily look at women who are stronger, faster, richer, prettier, and find tons of them out there just crushing it.  But, if I were to talk to those women, they could say the exact same thing about other people and feel bad about themselves compared to others.

On top of that, the other way I could feel bad about my running is just by me saying I’m a sub-3 hour marathon runner. I know that I am making other runners feel bad if they are not as fast at the marathon.  I don’t want to brag or come across as better than other people, so not talking about my accomplishment, even though it was really awesome, is yet another way to diminish it.

All of this is utter nonsense and yet incredibly common.

So instead, what I want to do is celebrate running as a vehicle to being awesome.  Not better than anyone else, not the best, not striving for perfection (because that doesn’t exist).  What running does is it gives you a way to be strong and accomplished on your own terms.  You can set big scary goals, like running a marathon, or even running around the block, and you can chip away at those goals each and every day until you get there.

I just got off the phone with a runner looking for a coach and he started the conversation saying he wasn’t an athlete, yet he runs every day because he is a better person when he runs.  First of all, yes, he is an athlete, but also yes, we ARE better people when we run.  We are awesome when we run.

So what does it feel like to be an awesome runner?  Physically, it feels wonderful.  You can go for a run and be confident that you can do it, knowing that your day will be better, and you are getting fitter every time you come back from a run.  As you get fitter, you have more energy for all the other things in your life like chasing the kids around or crushing it at your job.

If you’ve transformed your body through running, it can be incredibly validating that your hard work has paid off and your clothes fit better than ever.  Our physical appearance is another way that we can feel bad about ourselves if we let it and running alone doesn’t magically change every runner into a supermodel.  But running is awesome because your body has to work with you to do it.  It will change and adapt on the inside as well as on the outside.  It’s okay to be proud of yourself if you’ve made massive changes in your life and you look great because of those choices.  It’s also okay to be proud of yourself if you are a work in progress or if you don’t change the way you look from running.  We are all runners and running is awesome.  Own that, no matter where you are in your journey.

Mentally, running makes you more awesome mainly because it teaches you that you can do hard things. Running is hard.  It hurts.  It can break your heart.  And yet, if you get through those tough times in your running, you will be stronger mentally than before.  If you go from never being active in your life to run/walking around your block, that effort made you more awesome than you were yesterday.

You don’t have to like that run.  You don’t have to feel awesome every time you run.  But when you start to identify yourself as a person who is active and one who strengthens her body and mind through running, it becomes something you don’t want to get too far away from.  Accomplishing something physically builds self-confidence mentally.

The other part of the mental benefits of running is the mind-clearing power of running.  While some would argue whether or not running is truly a form a meditation, once you are fit enough to lose yourself in a run, awesome things start to happen.  You might find that you are more creative or more calm or less anxious on a good run.  If you are running outside, you are literally breathing in the world around you as humans were meant to do, instead of yet another hour staring at a mind-numbing screen.

Socially, running can also transform you.  Even the most introverted runner can find his tribe in the world of running, whether it’s in person or online.  When I interview guests on the Run to the Top, and ask them what the greatest gift running has given them, the most common answer is the people.  I never understood this when I first started running.  I ran alone and couldn’t grasp the concept of meeting people through running.  What was I supposed to do, rip out the headphones out of the ears of strangers running and ask them to be my new buddy?  No, don’t do that.

Your running friends will be there for you at 5am to run in the dark with you.  They will listen to you talk about every detail of your workout and will understand what you felt like in that last 400 meter repeat.  They will give you encouragement to sign up for that next race, celebrate with you when it goes well, and they will be there to commiserate with you if it doesn’t turn out how you hoped.  In short, your running friends are awesome and they think you’re pretty awesome too.

Being modest and humble about your running can certainly have their place at times, but so does owning your awesomeness.  It doesn’t have to be about time, but beating a time goal you’ve worked hard for is a big deal that is, yep I’m going to say it again, awesome.

So let’s start reframing the conversation about our running and appreciating its power at every pace and distance.  If your running or your beliefs about your abilities as a runner are getting you down, it’s time to shift the way you talk about it.

One thing that can help is to have both big goals and small goals.  The big goals, like a race or running a specific distance, are like a north star guiding the direction of where you want to be.  The small goals are the daily habits that will get you there.  You don’t have to be perfect at all those small goals, but be consistent with most of those things and the big goal will fall in line.

Every Run is Awesome

Reminding yourself often that you are a better person simply because you went for a run can take away a lot of the negativity, especially if you are not interested in racing.  Running a few miles a few times a week is awesome and you can be proud of that no matter who you are talking to.

If you agree with how awesome running is, and are ready to celebrate the fact that you are an awesome runner, I’d love to hear about it.  Follow me, @theplantedrunner and tag me on instagram with your running post using the hashtag #awesomerunner.  I’ll respond to you personally and I’ll send two winners a free supply of LMNT hydration powders as a thank you.

Because this is so awesome, I’ll say it again.  Follow and tag me, the plantedrunner on instagram with the hashtag #awesomerunner and I’ll send two awesome runners some cool free stuff.  Stay awesome out there!

Curious about what it would be like you reach your true potential through running, plant-based nutrition, and mindset coaching? Let’s chat about it in a free call today!