The Best Strategy to Race Faster 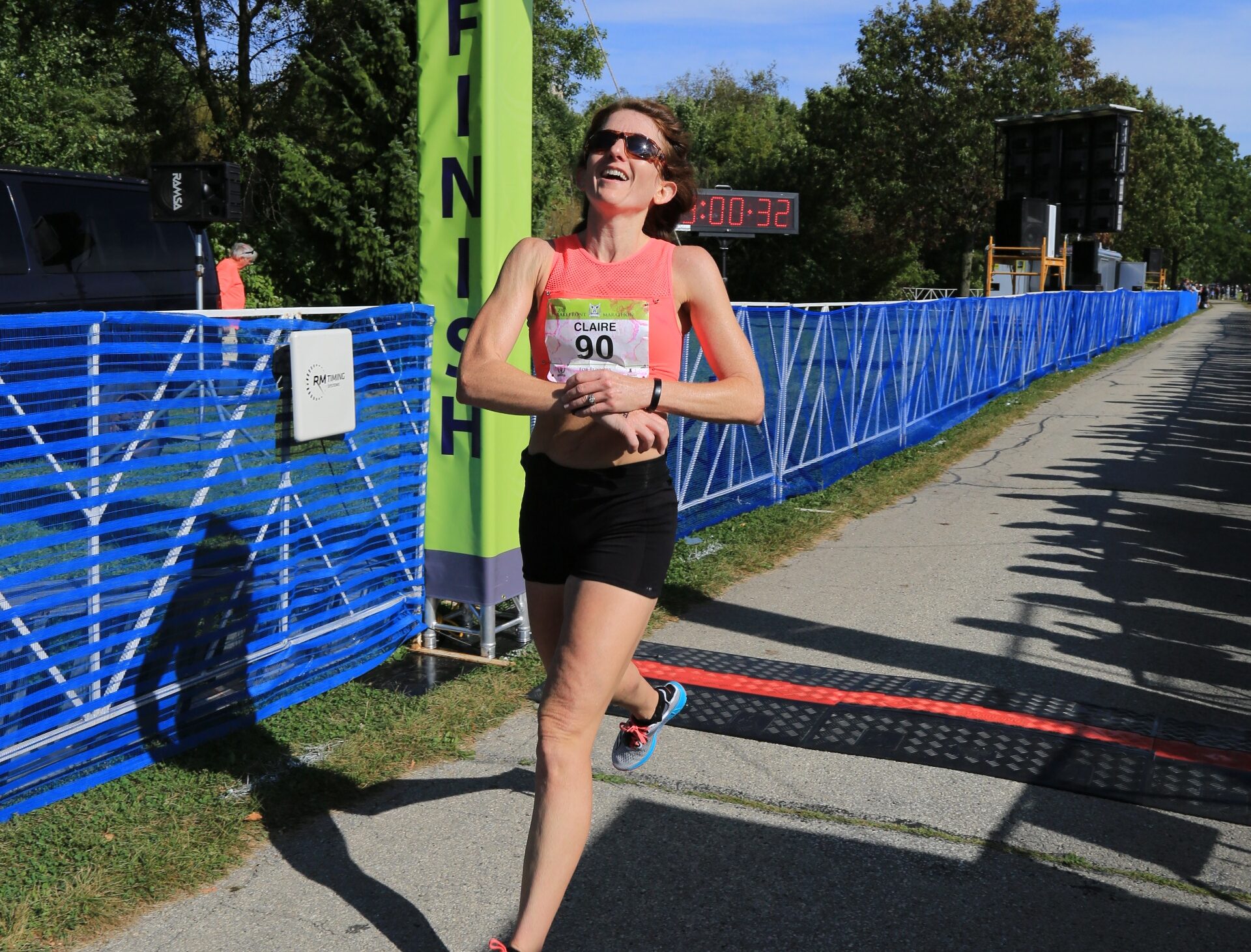 Learn the best strategy to race faster, stay steady until the end, and cross that finish line strong!

Have you ever watched a little kid run?  They blast off as fast as their little legs can go and then flame out to a stop almost as fast as they started.

This instinct to run hard from the start is something that is tough to unlearn. That’s why you so often see new runners, and even experienced runners do the exact same thing in workouts and races:  they start off too fast and at some point, dramatically and disappointingly slow down, finishing far slower than their potential.

But there is a proven race strategy that race after race produces far better results.

It’s a strategy that has led to nearly every world record in distances from 1500m to the marathon and beyond.  It’s called the negative split.

A negative split is simply running the first half of your race slower than your second half.  That means you have to run slower when you are feeling good and run faster when you are feeling tired.  Sounds impossible, right?  Well, it’s not easy, for sure, but it’s a concept that can work in nearly any race to ensure that you get the very most out of your potential.

Why Going Out Too Fast Will Cost You

It’s easy to see why we naturally go out too fast.  We feel good and fresh at the start and often underestimate the effort required to sustain our pace through the entire distance.  Sure, intellectually we know that the race will get tougher the longer it goes on, but in the quest to run a new PR or crush a new distance, we often get unrealistically optimistic at the start of the race.

We think maybe, just maybe, all of our training has suddenly peaked at mythical proportions and we can run faster than we have ever run before.

Another common experience is that we just want to break free of the crowds at the beginning of the race so we are not held back.  We just want to run our own race!

One master’s runner, Jeremy, told me a story of a 5k race he ran where he purposely wanted to start the race faster to get around some slower runners that were blocking his way.  He did get ahead of the slower runners, but he ended up paying the price later.

I can’t help but think that those slower runners Jeremy was trying to avoid actually could have been beneficial.  Perhaps if he had used them to pace his first mile slower, that final mile would have been faster and less painful and here’s why.

The Positives of the Negative Split Strategy

If you start running at your goal pace from the gun, you have not given your body enough time to warm up and settle into the race.  The nervous energy, adrenaline, and other feel-good hormones haven’t had a chance to fully circulate and be beneficial to your effort.  You might start breathing more rapidly than you would have had you eased into the pace.  Mentally, you may feel more frantic and panicked than if you had started a little less aggressively and mental stress is just as impactful as physical stress, which just compounds the effort as you run.

So for the first quarter of the race, it’s far better to be much slower than goal pace to ensure that your muscles and your brain are ready to peak later in the race when things get much harder.

In fact, your body is not at its best until about the middle of the race, so pushing hard at the beginning will only make the second half more difficult.

Because your body is primed for performance mid race IF you start slower, a negative split is actually easier to achieve than you might think.

I will add that even splits as opposed to negative splits can also be a very effective strategy as well. The concept of even splits is nearly the same as negative splitting because the effort to stay even rises as the race goes on. But I would argue that staying even the entire race is more challenging and takes greater skill because there is so little room for error. By starting off slower than goal, you have more room to adjust as the race unfolds.

Now if it were easy to execute a negative split just because I told you to do it, I could end this post right here.  But simple and easy aren’t the same thing, so let’s break down how you can actually achieve it.

How to Practice a Negative Split in Training

The first step is practice.  Just like everything running, the more you practice, the better you will be when it counts.

This does not mean that you should try to finish every single run faster than you started, but you can try practicing first on your easy runs.  Easy runs should ALWAYS start very slow.  Not just easy, but very slow.  You are simply jogging for the first 10-15 minutes at a very leisurely pace.  This allows blood to start flowing, bringing oxygen to your muscles, and your heart will gradually start beating faster, instead of suddenly.

As you start to get into the groove of your easy run, you can allow your pace to creep faster, but your final mile should still be well in your easy zone.  If you don’t know what easy means for you, my favorite trick is to close your mouth.  If you can run several minutes just breathing out of your nose, then you are going easy.

The next place to practice negative splitting is in your speed workouts.  Even if you are not training for a specific race, making sure your last rep is the fast rep is a great idea.  The trick to executing this is not by focusing on how fast the last lap needs to be–it’s by making sure the first lap is much slower.

Now, I know that runners absolutely HATE this advice.  When I assign them to go to the track, they want to make the most of it and crush the workout start to finish.  But I promise, the most reliable way to making your final rep better than the first is to consciously run the first few just a little slower than you think you should.  And if by the end of the workout, you have a ton of juice left, by all means, give it what you’ve got at the end.  Just don’t do it at the beginning.

You can also practice running faster on tired legs by adding some speed at the end of some of your long runs.  While the main goal of a long run is to boost your aerobic capacity, finishing fast is also a skill that needs to be polished.  So if you have a 12 mile long run, for example, try running the first 8 miles nice and easy, run goal half marathon pace for the next 3 miles, then slow down to a jog for the final mile as a cool down.

Be Realistic With Your Goal Time

With workouts and easy runs going well, you should start to be able to come up with a finish time estimate that is reasonable for your next race.  We never know what will happen on race day, of course, but aiming for a slightly more conservative finish time than your training says can help you pull off the negative split strategy, and perhaps cross the finish line faster than expected.

I believe it’s that feeling of the unknown, the doubt, the lack of confidence, that hurts our race performances the most.  And that’s natural!  If we don’t have a ton of experience racing, we don’t know what will happen, so many runners simply say “I’m going to do my best!” and race without a plan, without a strategy, without confidence that a strategic plan could actually help us.  A lot.

Jeremy used to race like that, but now, detailed planning is key.  He even programs his watch with heart rate zones and mile splits to ensure he stays right where he wants to be.

I don’t think every runner needs to go in quite as much detail as Jeremy does, but if you have gone out too fast in a race in the past, I would certainly recommend that you do sit down and make a solid plan to increase the effort as you go, choosing paces based on what you have done in your workouts.

Use Negative Effort Instead of Pace for Hilly Courses

The one time that negative splits won’t work is a particularly hilly race or one that starts off downhill and ends uphill.  You will simply run faster on a downhill with less effort.  But that doesn’t mean you completely forget about the negative split strategy.  You’ll just need to use your effort as a guide, instead of your pace.  You’ll still want to start off at a lower effort, gradually increasing as you go.

Ultimately, it’s up to you.  Would you rather the race start off fast and strong only to be forced to slow long before the finish?  Or would you prefer to control your effort from the start, metering out your energy strategically, so that you can power across the line with pride?