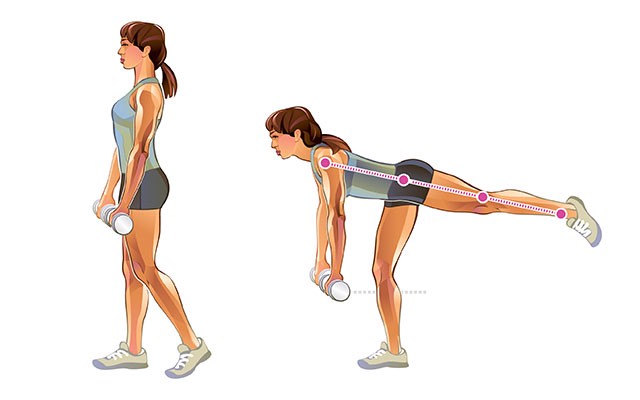 Unilateral strength training helps runners strengthen their weaknesses while building a rock-solid core at the same time. No crunches or sit ups required!

One Foot At A Time

The simplest difference between running and walking is the air time. When you walk, there’s always a moment in your stride when both feet are touching the ground. This is called a “double supported” or bilateral movement.

When you run, only one foot touches the ground at a time, which is called “single supported” or unilateral. There is a brief moment of air time as you hop from one foot to the other.  You’ll take thousands of these hops every mile and the impact force with each foot strike can be 5-12 times your body weight.

With that kind of repetitive force, it’s no wonder that so many runners get injured each year.  And many runners simply don’t take the time to do anything else besides run and that leaves them vulnerable.

This is where strength training comes in and specifically, unilateral strength training. By working on our muscle weaknesses and imbalances one side at a time, we can help buffer some of those impact forces.

Strength training in general has enormous benefits for runners. Research has shown that resistance training changes more than just your muscles; it also increases the strength of ligaments, tendons, tendon to bone and ligament to bone junction strength, joint cartilage as well as the connective tissue sheaths within muscle. It also has been shown to increase bone mineral content which may aid in prevention of skeletal injuries like stress fractures.

Resistance training can also aid in prevention and treatment of overuse injuries. Runners will have different overuse injuries compared to say, tennis players, and strength training specific to each sport can help correct any imbalances that increase injury risk.

You can do all the traditional squats and deadlifts that you want, but if you aren’t strong on one leg at a time, you are losing efficiency when you run. A less efficient runner is slower, burns more energy, and very likely is less balanced from one step to the next, exposing themselves to injury. Unilateral work can help correct this.

Let’s start with the squat, for example. Both feet are on the ground as you lower into a seated position and push back up to standing. This is a classic move for runners for a good reason. It’s a compound movement that builds strength and power in the quads, hamstrings, hips and glutes.

But if your right side happens to be just a touch stronger than your left side, continuing to squat bilaterally will not correct the imbalance. In fact, your dominant side will continue to assert its dominance, especially as you tire. Your strong side will get stronger and your weak side will never catch up.

One way to think of bilateral training is that it’s kind of like an uneven doubles tennis team. The stronger partner keeps taking up the slack for the weaker one. The strong player ends up doing more work, which doesn’t allow the weaker player to improve much. Eventually, the stronger player will tire out from doing twice the work, exposing the team’s vulnerability. If they were more equally matched, they’d be far more successful as a team.

One solution to becoming a better doubles tennis player is to get better playing singles, where you have to do all the work yourself.

The equivalent of singles tennis in the weight room is single-sided or unilateral training.
With single leg squats or pistol squats, each side is engaged to do the work all by itself. Most people will quickly learn which side needs more work and over time, you can get closer and closer to symmetry on both sides.

There Is No Perfectly Balanced Human

Now, to be clear, no human being is perfectly symmetrical. Even Usian Bolt, one of the greatest runners of all time, doesn’t have a perfectly balanced stride. Perfection isn’t the goal. The goal is to become symmetrical enough so that you don’t notice a major difference from one side to the other when you perform single-leg exercises.

One of my favorite unilateral moves is the single-legged bulgarian split squat. You start by getting into a squat position while resting the top of one foot on a bench or chair behind you. Keeping your knee and toe straight and your back upright, squat down in a slow and controlled motion. Then push back up. To increase the difficulty, you can add weights.

But Don’t Give Up Bilateral Training

Bilateral training is still critical and strengthens your body in a very different, yet important way.

The reason you don’t want to totally ditch your two-legged squats, deadlifts, and all the other bilateral moves is because they can provide you with something that one-sided moves can’t and that’s power.

Unilateral moves are best for correcting imbalances, increasing coordination, and lowering injury risk. They make you better able to do the training that directly makes you into a faster runner.

To truly focus on strength and power, we must lift with our entire bodies and focus on force production.  After all, the more forcefully you can push off the ground, the faster you can run.

So while unilateral exercises have an important part in any runner’s strength training, especially if you are injured or injury-prone, they’re not adequate alone and shouldn’t be the main way you get strong.

If we go back to our tennis metaphor, yes, learning to get good at singles tennis will make you a better at doubles, but if your goal is doubles tennis, you need to learn to work together as a team.

Unilateral Strength Exercises Can Be Tough

The next drawback to many one-legged exercises is that they are often much harder to perform, especially if you are new to strength training.  A pistol squat, for example, is extremely challenging for most people until they have some base of strength.  Getting strong first with great two-legged squats is the solution.

Because you are far more stable in a bilateral move, you can learn the timing and develop the strength to perform the exercise correctly, before introducing the balance and coordination challenges of single leg movements.

Transition with a Kickstand

Once you are ready to add unilateral training, remember that there are modifications that will help make the transition easier.  With our pistol squat example, you can start by not fully taking your front foot off the ground, but instead using your heel as kind of a kickstand.  All the weight is on your back squatting leg, but your front heel provides just a little balance and support.

The same kickstand trick can also be used in deadlifts and front squats as well. Instead of floating one leg behind you in a one-legged deadlift, pop the non-working heel off the ground so that only the toes of that foot are touching the floor before starting the deadlift. For the front squat, same thing: get into a standard squat position with your feet shoulder width apart. Then pop the heel of the non-working foot off the ground so that it’s only there for balance. Most of your weight is in the working leg.

Once you get good at the kickstand moves, you can graduate to truly unilateral work.

A solid strength training routine can be a big part of becoming a faster, stronger, less injury-prone runner. Of course, what you do in your running shoes each week is critical as well, but adding in some smart doses of both unilateral and bilateral strength training will give you the foundation to run your best for life.