How To Build Mental Toughness for Runners 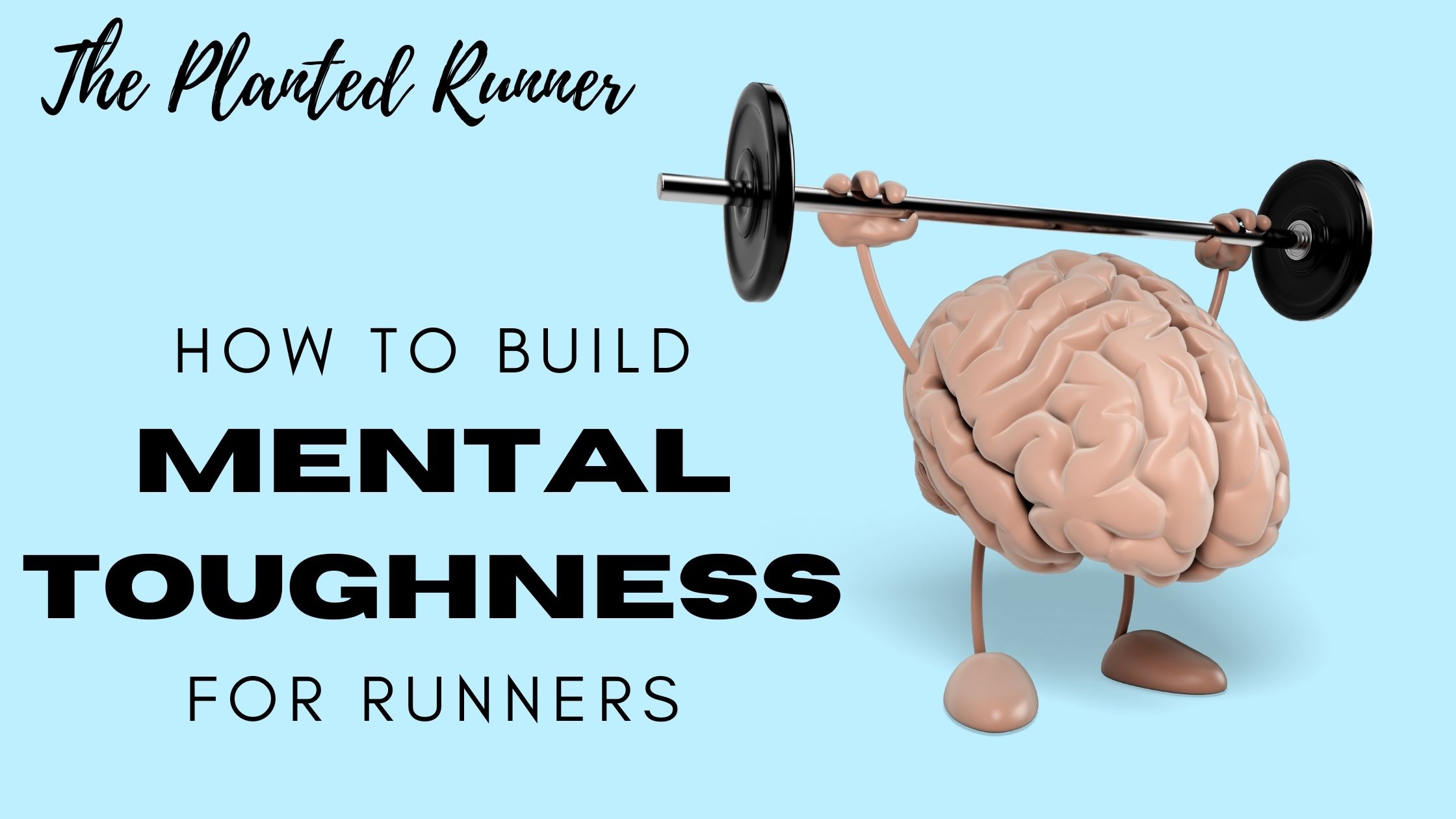 Most of the runners I coach want to know how to build mental toughness.

When things get hard in a race or tough workout, they tend to break down, slow down, or give up.  They might feel like they have the physical fitness to complete the workout well, but feel like something is holding them back mentally.

You Can Train Your Brain

Before I get into this, everything that I will talk about here has to do with effort-based pain.  I’m not trying to teach you how to run though a pulled hamstring or a stress fracture.  This is all about getting the best out of yourself when the effort gets high, not pushing through injuries.

So with that out of the way, let’s get into your brain, shall we?

When we run, there is often an internal argument going on with the desire to push and the desire to stop.  Your brain is very protective of the body and relies on you not killing yourself when you run.  So if the brain gets any hint that you are doing something out of the ordinary, it will sound the alarm beginning with negative thought patterns.

The simple way to beat this is by training so well and so carefully so that you always run within your ability, which gets better and better with time and practice, and never trigger a sense of panic from the brain.  You practice running hard so when it’s time to run hard, your brain is used to it.

But c’mon, we race to push ourselves!  We want to know how fast we can get from Point A to Point B and if we stick with what the brain is happy with, we will never reach our true potential.

So if you are going to push, you will get push back from your brain.  So how do you deal with it?

Don’t Skip the Warm Up

Physically, besides good training, making sure you are warmed up can make a huge difference.  If you hit the starting line cold, and fly out of the gates, your body thinks you are being chased by a saber-toothed tiger and will flood you with adrenaline.  That’s a good thing since it will help you run faster, but when the rush is over, the shocked brain will be ready to calm down and slow down.

But if you ease into your speed with a good warm up and a conservative start, the brain gets a heads-up, if you will, and says, “oh yeah, we’re running now.  I’ve done this before.”  And the chance of the panicked negative talk lessens or at least gets pushed down the road.

Anticipate the Arrival of Negative Thoughts

Being prepared mentally for the battle ahead is just as important as being physically ready and some say it’s even more important.

The first step is to expect that it’s coming.  You should not be surprised that your brain wants to stop you from doing hard things and thoughts will arise that will tell you to stop, slow down, take a break.

Give Your Negative Voice A Name

By creating an identity for your negative self-talk, you are in a sense, externalizing it, which helps you separate the temporary emotion from what you really want. It’s not really “you” who wants to quit; it’s an uninvited guest in your head.

For me this voice was always very sweet and kind, disguising her true evil.    She is Nancy, a sweet Southern granny, that just wants me to slow down and eat some cupcakes with her.  “You’re tired, dear.  Why don’t you slow down?” she says.  “No one will be upset with you if you slow down, sweetie.  Your family will still love you if you quit. Why are you doing this anyway?” she asks.

It’s hard to argue with Nancy because she’s right!  I am tired and my family will still love me if I don’t run my goal time.  And when you are tired and still running, it’s hard to come up with a good argument against such sound logic.

So the trick is to prepare ahead of time.  I know Nancy is coming along for the ride, but she doesn’t get to drive the bus.  She is sweet, but overprotective.  She is kind, but honestly, she’s getting in my way.

Creating an identity for my negative voice helps me separate it from myself and my true goals and dreams, even though of course it is a part of myself.  If I make Nancy just another obstacle in the journey, rather than letting her get a say in the decision making, then it’s easier to say, “shut up, Nancy!” and keep on running.

My next tip is to remember that feelings aren’t facts.  You can even use that as a mantra when things get hard in a race and say it over and over again to yourself.  Feelings aren’t facts. Your brain creates feelings and they are as ephemeral as the clouds on a summer day.  Feelings are real and I’m not saying you are imagining them, but they are creations based on past experience and what your brain is concluding based on perceptions of the facts around you.

So when you are running hard, your brain might say, “this is hard.”  And when you say that, you might think, “hey, I’m right, this really is hard.”  And then, “yes, this does feel hard and now it feels even harder.”  And on and on the circle of brain chatter goes, a spiral of self-fulfilling prophecy.

But if instead, when you think, “this is hard,” you answer, “yes, but things will change, just hang on,” you’re acknowledging that while racing is certainly difficult, every fleeting emotion can and will pass.

In cases like this, I like to use the mantra, “this mile.”  I forget that I have 25 other miles ahead of me or whatever the distance left, and shrink my focus to the mile that I’m running.  Nothing else matters.  By chanting “this mile” over and over and over, there’s no room for the two sides of my brain to argue with each other about pushing or pulling back.  Arguing, both in running and in life, is exhausting, and I want to use that energy for speed, not a brain battle.

Take The Words Away

If the arguing gets too intense, take the vocabulary away.  Instead of allowing your brain to think whole thoughts, reduce your thoughts to numbers and start counting.  This tip really works and lots of runners use it to drown out their noisy brains.

I prefer to simply count to ten over and over again and the reason I don’t go higher is because the rhythms of the lower numbers is easier to time with my steps.  “One, two, three” is easier to run to than “twenty-five, twenty-six, twenty-seven,” for example.

Counting provides a distraction from all the hard work you are doing and helps you forget for a few moments that you are running hard because you are not focused on everything that hurts.  The chatter is limited to a task you learned before kindergarten so it’s deeply familiar to your agitated brain.

On the flip side of distraction is hyper-focus and that can be equally effective in keeping your head in the game.  Many runners like to do a head-to-toe form check when things get tough.  In one sense this is paradoxically still a distraction technique since focusing on keeping your head up and your shoulders down and back, can help distract you from your screaming quads, but for most people who like this technique, it doesn’t feel like a distraction.  The attention you are paying to your form physically helps you run more efficiently, which means that running hard is less effortful.

Get Out Of Your Head and Look Around

My final tip is if things are getting too intense inside of your head, get out of it!  Look around and start playing some mental games with the things and people around you.  Maybe it’s picking out a telephone pole and just trying to run your best until that point.  Maybe it’s seeing the guy in the red hat in front of you and seeing if you can reel him in like a fish and catch him.  Or maybe it’s breaking into a smile (which is a natural pain killer, by the way) and giving that little kid on the side of the road a high five.

Running and racing well does not have to be all about biting the bullet and grimacing your way to the finish line.  In fact, relaxing your face eases tension and makes running easier.  If you tend to get too tense about things mentally, you are very likely getting tense physically, too, which costs precious energy which should be going to your legs.  If that’s you, think “relaxed fast, relaxed fast” or something similar as your mantra.

Racing your best often involves pushing beyond what you’ve been trained to do physically.  But if you practice some mental coping strategies during your hard days of training you will be far more prepared for the huge mental challenge on race day.