Plan Your Race Well and You Just Might Surprise Yourself

One of the things that I love about racing is the anticipation. You have no idea how well you are going to do until you cross the finish line.  You could have the best training, the best coach, the best nutrition, the best weather, (or none of those) and your performance capability is still a surprise until the end.

Especially if it’s a distance you’ve never raced before.

How are you supposed to plan for a race that you’ve never done before?  You have no idea of what your body and your brain are capable of!  You can make an educated guess, of course, but sometimes you just have to cross your fingers and hope for the best.

As a coach at Runners Connect, my job is to help plan race strategy for athletes who have never raced before. But if the runner doesn’t know what he is capable of, how on earth am I supposed to figure that out? I’m a coach, not a psychic!

Communication is the key.

Successful coaching happens when there is an open dialogue between the athlete and the coach.  It’s a relationship where both parties work together at a goal and feedback goes both ways.

Let me tell you about Jay.  Jay likes to work hard and isn’t afraid to push himself.  “I tend to be an extremely impulsive person in general,” he said, “and this trait bleeds over strongly into my races.”

Being impulsive in a race can lead to disaster.

Jay had his very first half marathon coming up and he was working on a race strategy.  The race was the Desert Classic in Surprise, AZ and the course was out and back with a long, gradual uphill to the half-way point, followed by a long, gradual downhill in the second half.

That’s pretty much an ideal course because the incline forces you to be slower in the first half and the decline will allow you to fly through the second half to the end.  The elusive negative split.

Here’s what he had to say before the race:  “I want to run under 1:28, closer to 1:27. Under 1:27 would be mind blowing. I’m unlikely to win this race so I want to focus on formulating a race plan and sticking to it.  I know from recent training that 6:45 is a doable pace for me over 6 miles.”

Okay, I’m thinking, a 6:45 pace is a 1:28 half.  He needs to be able to run over twice the distance at that speed to reach his goal.  Which he has never done before.

This was the race plan he came up with:

His drive and determination to succeed through pain is impressive, right?  But he still had concerns.

“My biggest fear is that the field isn’t as competitive as I think it will be and I get baited into an actual race and do something stupid early and bonk hard late.”  Very valid point.  “I’m already mentally preparing myself to let people go and stick to the plan hoping to find them on the last mile.”

The ability to let other people go ahead at the beginning is essential.  Competition is great, but if others around you are going faster than your race pace, you have to just let them.  It’s not easy to do, especially if you are as competitive as Jay is.  I love how he recognized this trait in himself ahead of time and prepared for it!

But I did feel that his plan needed a little work.

“My first thought is that your pace goals seem too rigid,” I told him.  I know from personal experience that if you set a to-the-second time goal and you don’t get it on the dot, it allows space for that negative voice to get louder. “I’d rather see at least a 5 second range so that if you miss something, it doesn’t mentally hurt your race.”

I suggested that he set a “floor” for the first half miles, as in the pace that he should absolutely run no faster. A 6:46 pace is not conservative enough for the first few miles, especially considering it’s uphill. Racing too fast in the beginning consumes energy that will always be stolen from the last few miles.

But, (and here’s the scary part) if he goes too slow at the beginning, the deficit created will be too great to make up in the last half, even going down hill.  It’s a very fine line.

“How much time can you make up on the downhill?” I asked. “Miles 8-12 will need to be closer to 6:30 pace. How long have you been able to keep that pace in training? Especially when you are tired?”

The answer to that would be a surprise until race day.

I had really high hopes for Jay.  But I have to admit that I was anxious as well.  If he succeeded, then I succeeded as well.  But what if he failed because of the advice I gave him?

I just had to keep my fingers crossed.

So how did Jay do?  Let’s look at his splits with my thoughts in italics. 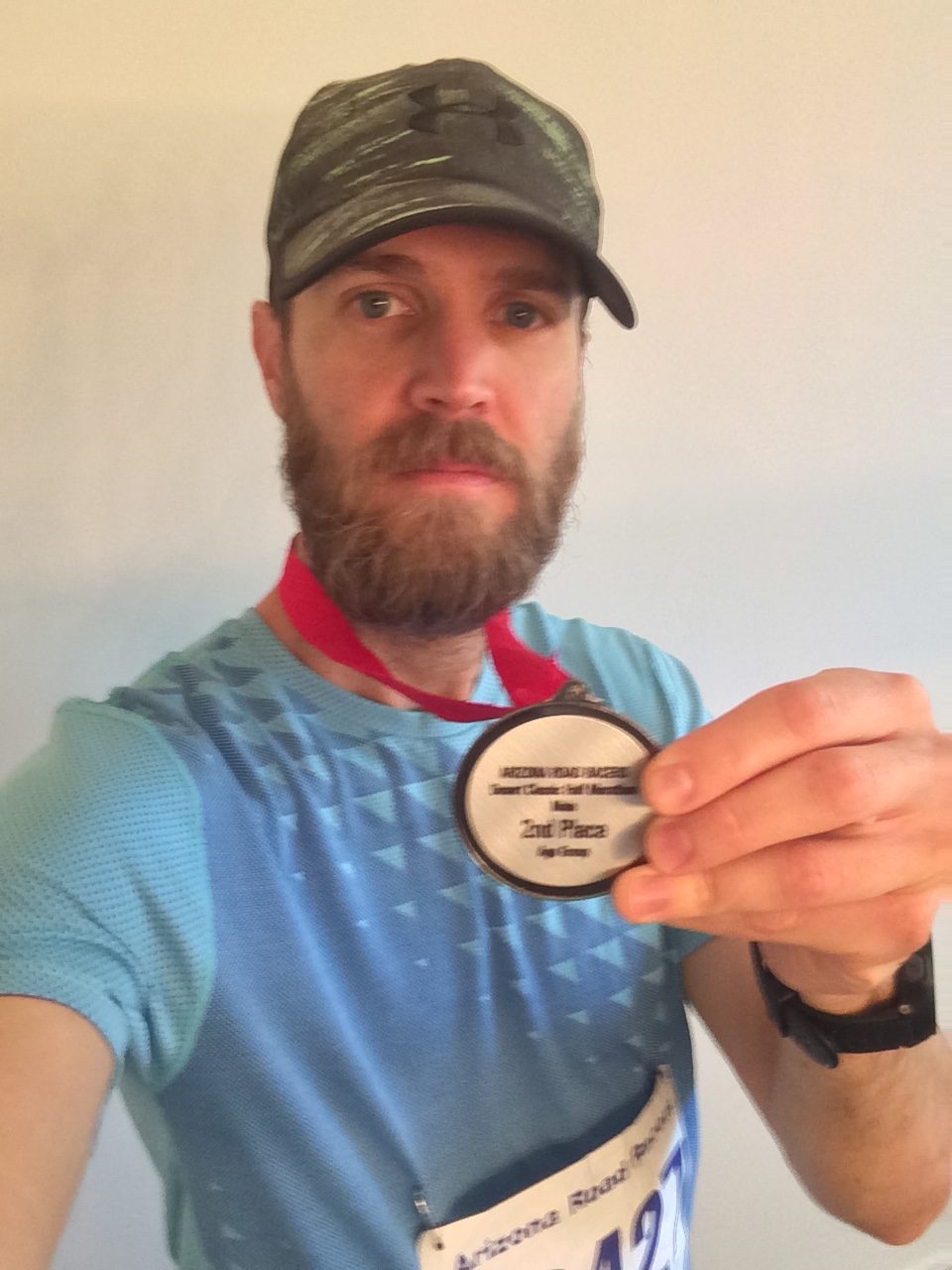 Jay after crushing his A+ goal

Jay finished a whopping 45 seconds faster than his A goal and even crushed his “mind-blowing” goal!

He was ecstatic.  Jay finished 7th overall and second in his age group.

He credits his success to the plan we worked on together. “Ran a conservative first half (thanks to good insight from Coach Claire) and had a strong finish. Instead of getting caught up trying to run with the lead pack I let them go early and just ran my own race.”

I’m so proud of Jay.  He planned for the ideal race, taking into account what he saw were his weaknesses and stuck to the plan, far surpassing what he ever thought possible.

Such a wonderful surprise.