The Newton, Part 2. So Much Better! 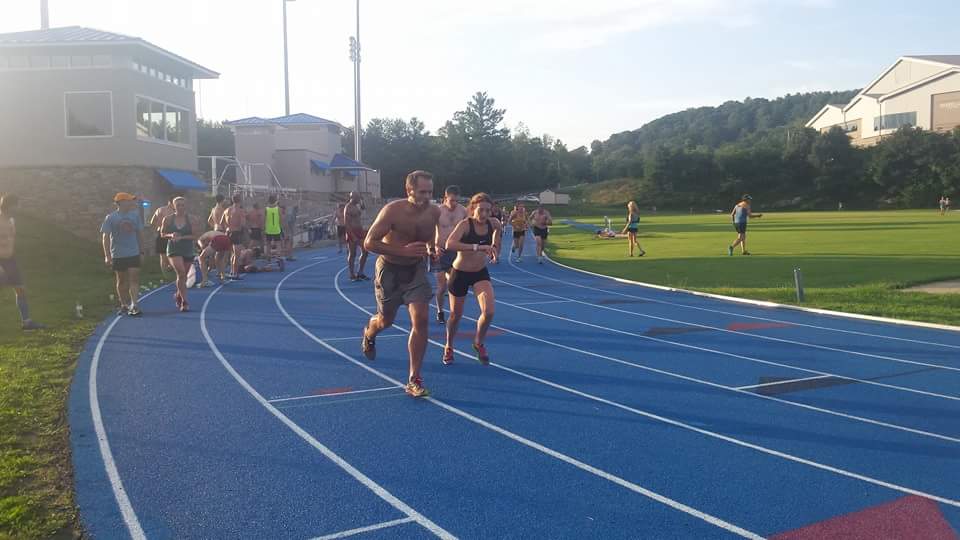 I feel like I should say that I was nervous before the Newton last night, but I wasn’t.  This is a benchmark track workout, designed to see how much speed has been developed over the hot summer training.  Of course I wanted to see improvement because I really want to become faster, but even more than speed, I want consistency.  Ultimately, it doesn’t matter how fast I can run 200 meters because I don’t race 200 meters.  My goal is to stay strong over long distances and working on my speed on the short stuff helps with that.  But speedwork is just frosting.  The cake is the development of the aerobic system with lots of longer, slower efforts.  Instead of being nervous about being too slow, I just wanted to focus on keeping steady.  Especially as I got more and more tired.

(If you don’t know what the Newton is, check out my post from May for the scoop.  Basically it is twenty 200 meter sprints with descending rest periods between each set of five.)

Here’s a recap of last night’s workout with my times per 200 meters in seconds as compared to my effort in May:

Set 1, 60 second recoveries:  40, 39, 39, 39, 40 (May: 40, 44, 41, 41, 41 ) I did not want to be much faster than May, but instead stay right at 40 seconds the whole workout.  Coming to the finish line, our group’s timer, Mark, was yelling out the seconds on his stopwatch.  During at least three of those intervals, I actually slowed right before crossing the line to keep myself even.  I was definitely burned last Spring by going out too hard and then struggling for the last two sets, so I wanted be sure I was steady.  It felt easy at this point, as it should.

Set 3, 30 second recoveries:  41, 41, 42, 41, 41 (May: 41, 43, 43, 44, 43)  Apparently, I couldn’t keep up the pace and I had lost my 40s.  I was still mentally okay with that because I wasn’t slowing drastically and was staying under control.  At this point in May I was thinking about quitting and that thought never even entered my head this time.  Sure it was harder to keep going still being out of breath from the last interval, but I never reached a degree of panic.  Mentally, I was so much stronger at this point.

Set 4, 15 second recoveries: 41, 41, 42, 42, 45, 44?, 42 (May: 43, 46, 47, 46, 45) Notice anything unusual? During this set, you barely have any time to catch your breath before lining up again.  I pay zero attention to which lap we are on, because we have a timer for that who, by the way, is racing diagonally across the infield to beat us to the finish line.  Not only are the timers staring at a stopwatch, shouting seconds to their group, they have to keep track of which interval and set we are on with how many seconds of rest.  Meanwhile, the fastest group is lapping the mid-pack (us) and we are lapping the last group, so three groups are attempting to line up and start at the exact same point on the track. (Cue the circus music.)  So when we got to what should have been our last 200, my lane partner Wes said, “last one.”  But someone else said no.  I breathlessly yelled to Mark, “how many more?!”  He held up three fingers and yelled, “Go!”  As I raced around the curve, my resolve to keep my speed up sank a bit thinking that we had three more to go.  If I knew it was my last one, I would have fired off everything I had to kick it to the end.  But I didn’t.  We lined up again and my sweaty fingers slipped on my lap button, so I’m not sure exactly what my time was, but it was slow.  Wes was not in front of me and was done (smart guy!).  With one more 200 to go, I gave it just about everything and crossed the line in 42 seconds.  I didn’t even realize we had run an extra two until after I had gotten home and looked at my splits. Not bad for running two more!

To appease my ego, I’m throwing out the 45 and 44 from the last set and keeping the 42.  Perhaps if I had gone a touch slower in the first set, I could have hung on to the 40s a bit longer, but overall, I’m very happy with the results.  It was a steamy night and I wisely backed off my normal strength routine this week so my legs could be fresher for this.  It definitely made a difference.

To say that I actually like the Newton might be a bit of a stretch, but it is fun to have such an intense scene at the track with everyone being so focused and seeing the timers zipping across the infield. It’s also short, with only 2.5 miles of work, so the pain is over quickly.  Most people grumble about the Newton since it’s so far out of most people’s comfort zone, but I have a feeling that most people secretly like the specialness of it. I like that I can compare apples to apples and see how far I’ve come.

The difference in a few seconds per half lap around the track might not seem much to those who are unfamiliar with track running, but for me, it’s not the actual times that matter.  My ability to keep up those fast paces even when tired has improved which will help me in the marathon.

Because every good cake needs a little frosting.

Sometimes You Just Have to Call It Good