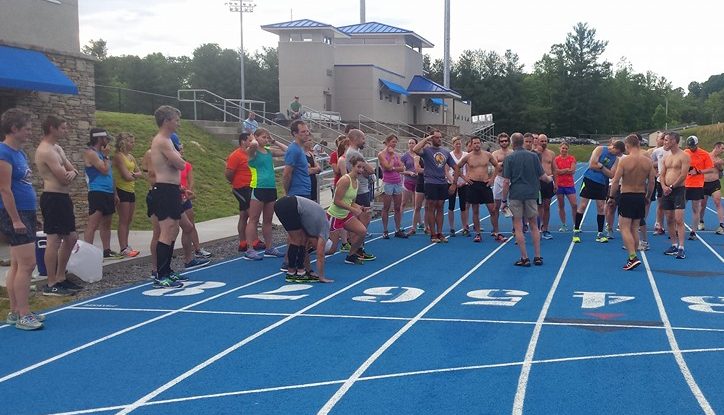 The Newton is the one workout of the year that we love to hate.  It sounds pretty simple: 20 repeats of 200 meters or halfway around the track (that’s a total of about 2.5 miles).  But it gets really hard, really quick because the rest in between each intervals gets shorter with every 5 reps.  In between the first five intervals, there is a leisurely minute to recover and fully catch your breath.  For the next five, it drops down to 45 seconds, which still feels pretty good.  The break for the third set of  five is only 30 seconds, which is not enough to slow your heart rate down much at all.  Finally, the last set allows a miserly 15 seconds which is just barely enough time to stop your watch and line up again.  The goal is to keep your pace even the whole time as it gets harder and harder.

The turnout at the track was big, about 45 people.  Norm split us up into groups and we each had an assigned timer who would run diagonally through the infield letting us know when to start each interval.  Out of the five groups, I was a little surprised to find myself solidly in the fourth, but it was definitely where I needed to be.  That just shows how fast the Jus’ Running Maggots are! I did the Newton workout last year and I thought I ran about 42 seconds for each 200 so I joined the 40-44 second group.

Set 1, 60 second recoveries:  40, 44, 41, 41, 41  The trick to the Newtons is to basically sandbag the first set of five.  You need to run slower than you are able because you will inevitably slow much more as the workout progresses if you don’t.  I thought running solid 40s would be pretty good, but I just picked that number out of the air without knowing what it would feel like.  Not sure what happened in the second interval (watch mistake?), but I felt good and comfortable with the first set, as I should.

Set 2, 45 second recoveries:  42, 41, 41, 40, 41  I was pleased with the consistency of this set.  Yes, it was feeling harder, but I was getting enough of a breather to feel solid in my effort.  Some of the people in my group were starting to slow, but I was feeling pretty strong.  As I made my way around each curve, I concentrated on letting my leg rise a bit higher than normal towards my butt to allow that leg an extra second of recovery before bringing it forward.  It seemed to work.

Set 3, 30 second recoveries:  41, 43, 43, 44, 43  And now the workout really began.  Starting out of breath each time was taking its toll.  The finish line of each interval seemed to be getting farther away.  Megan, who was sharing lane 5 with me, began passing me before the straight away and crossing the line ahead of me even though she started further back.  Should I skip an interval? I thought. No, if they can finish this, so can I.  I can do this, I argued, even if it’s ugly.

Set 4, 15 second recoveries:  43, 46, 47, 46, 45  Having a dedicated timer for this workout is essential, because your mind stops thinking clearly.  I thought we still had one more to go when we finished for some reason and I usually like to hammer the last one, but well, that was not to be. I was happy to be done with this one.  The one great thing about the Newton is that it’s short and the pain is over quickly.

Almost any time I run anything, I usually tell myself that I can do better.  Not in a self-disparaging way, but I usually think that I can improve next time if I try a little harder.  Reflecting on this one, I obviously slowed more than I should have, which means that I either need to get stronger or set the bar a little lower. It’s probably a little of both.  I have room for improvement but I also want to be realistic in my expectations of myself. 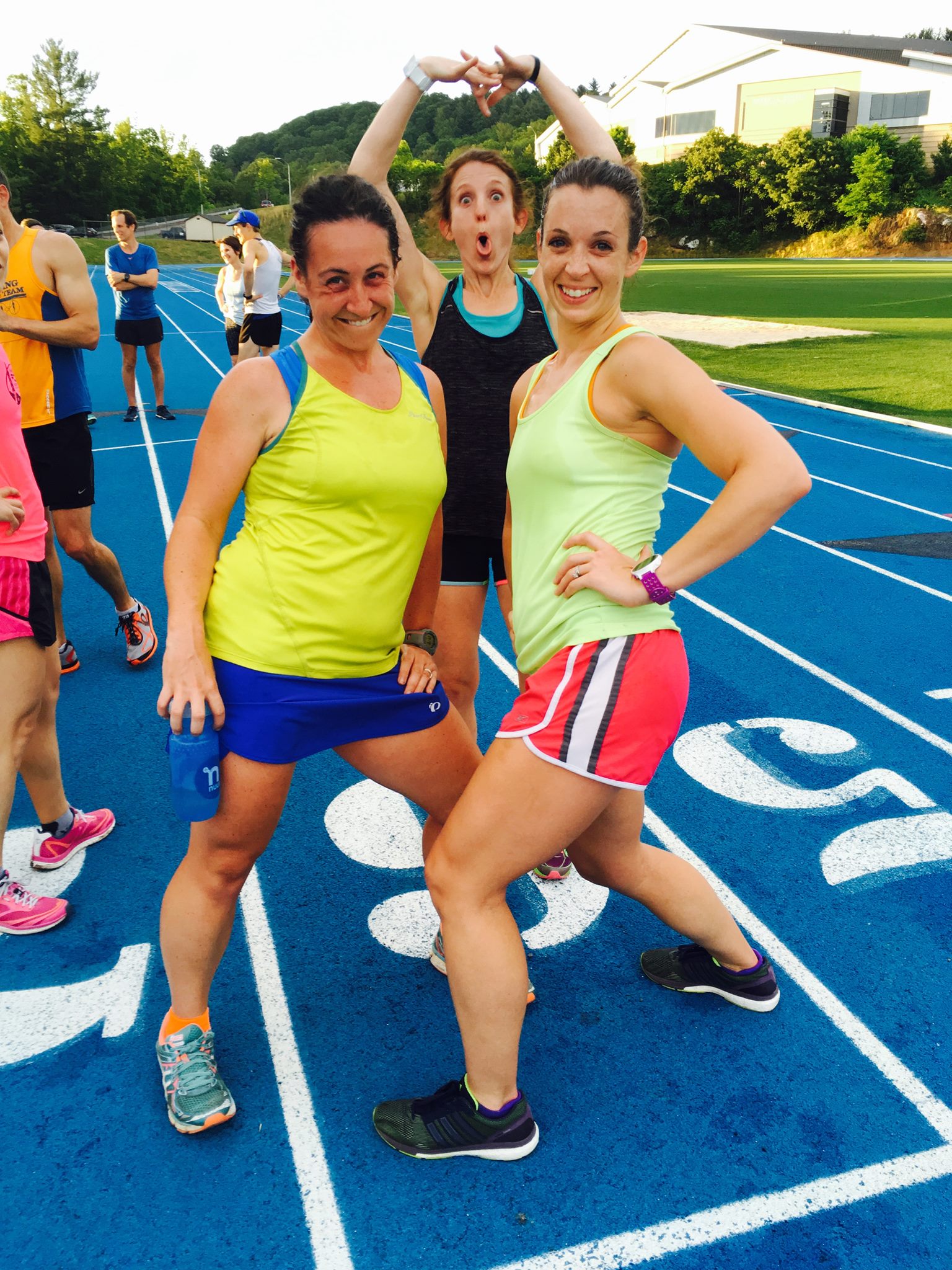 I went back this morning and looked up my splits from the Newton last May.  I actually ran it much better, staying way more consistent with 40 and 41 seconds for the first 3 sets and only slowing to 43 (with one 46 outlier) the last set.  I wonder what the difference was.  Yesterday I felt a bit sore in my legs from going heavy in my strength class, so I hope I can just chalk it up to that.

We will repeat the Newton in August, so we can compare our effort after a summer of speed work.  Hopefully, there will be a lot of improvement.