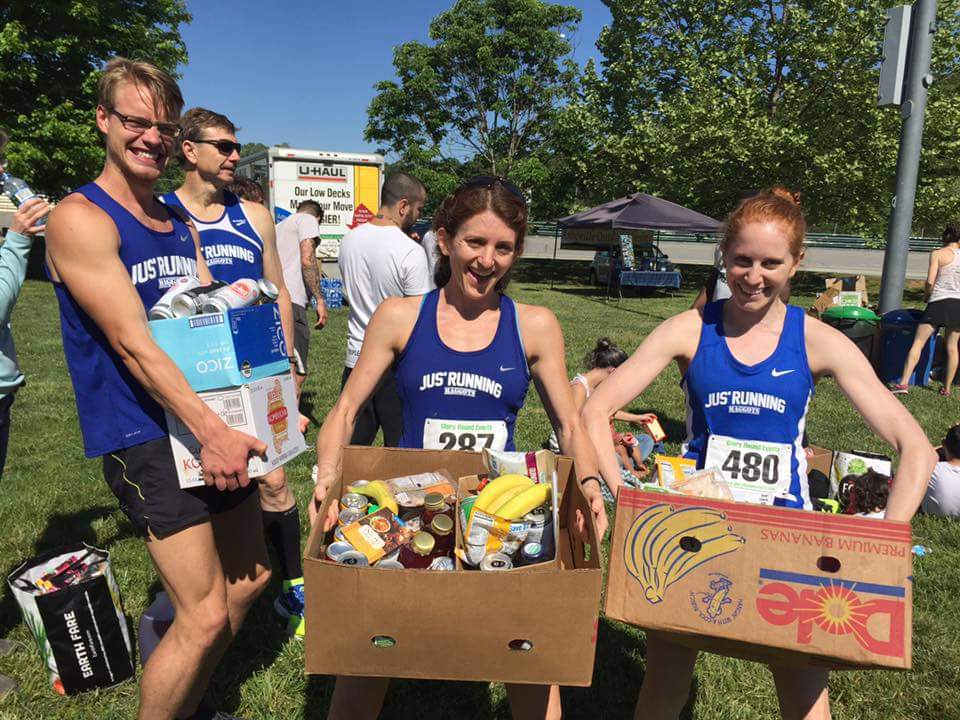 I signed up for the Earth Fare 5K since it’s one of the few flat courses in town.  I’m still coming off marathon training and haven’t done much speed work at all so this gives me a baseline for the 5K for this year. And judging from the top times last year, I figured I could get third or at least first place Master’s (I love being a Master’s!).

It was a gorgeous, sunny and cool day in the upper 40s-low 50s.  I had thought I would run to the race as my warm up since it’s only 1.25 miles from home, but at the last minute decided to drive so I would have a place to stash my long sleeves.  It turned out to be a very good plan since they checked IDs at bib pick up and because I had so much swag to carry home after the race.  It’s a very good thing when a grocery store is the main sponsor!

I really have no idea how to run a 5K as far as strategy goes.  My plan was to start fast, keep going fast, and finish fast.  I got the first part right at least.  My first mile felt good, but certainly a little hard.  I was pleased to see my split at 6:06.  If I could hang on to that pace, I’d not only break 20 minutes, but I could break 19!

I was in third place for most of the first mile, trading spots with my teammate Megan.  We run track together and are pretty evenly matched.  Sometimes I’m faster; sometimes she is.  Of course I would love to beat her, but my goal was just to stick with her and we did that until about halfway.  A cheerful brunette in a Crossfit shirt bounced by us easily, cheering us on, “keep it up, girls!” I thought she must not be running hard enough if she could have the energy to not only pass us but encourage us!  Were we slowing down?  Mile two was the turn around point and my watch clicked a disappointing 6:38.  Wow.  Thirty-two seconds slower?  That is an eternity in such a short race.

Megan had fallen back enough that I could no longer hear her breathing.  At this point, I knew I had fourth place and therefore 1st Master’s, so I just did what I could so stay there.  I would not say that the pace was painful, but it’s definitely something that I was ready to stop doing.  On a scale of 1-10, I’d give it an 8.  I slowed much less the last mile, coming in at 6:41.  My chip time was 19:54, an average pace of 6:25.  Megan crossed the line 15 seconds behind me for fifth.

I wonder if I would have been more pleased if I had started at a 6:25 pace and held it the whole time.  Pacing is a skill that I am a long way from mastering.  The winner, my teammate Kate, had less than a 6 second spread between her mile paces.  I know my first mile cost me time at the end, so would starting at perhaps a 6:20 pace leave me enough reserves to stay stronger through the end?  I’m not sure, but probably.  I’m sure that I need a lot more work at this.

Tomorrow is track with the infamous Newton workout.  Lots of 200s and perhaps even some puking.  Yay.