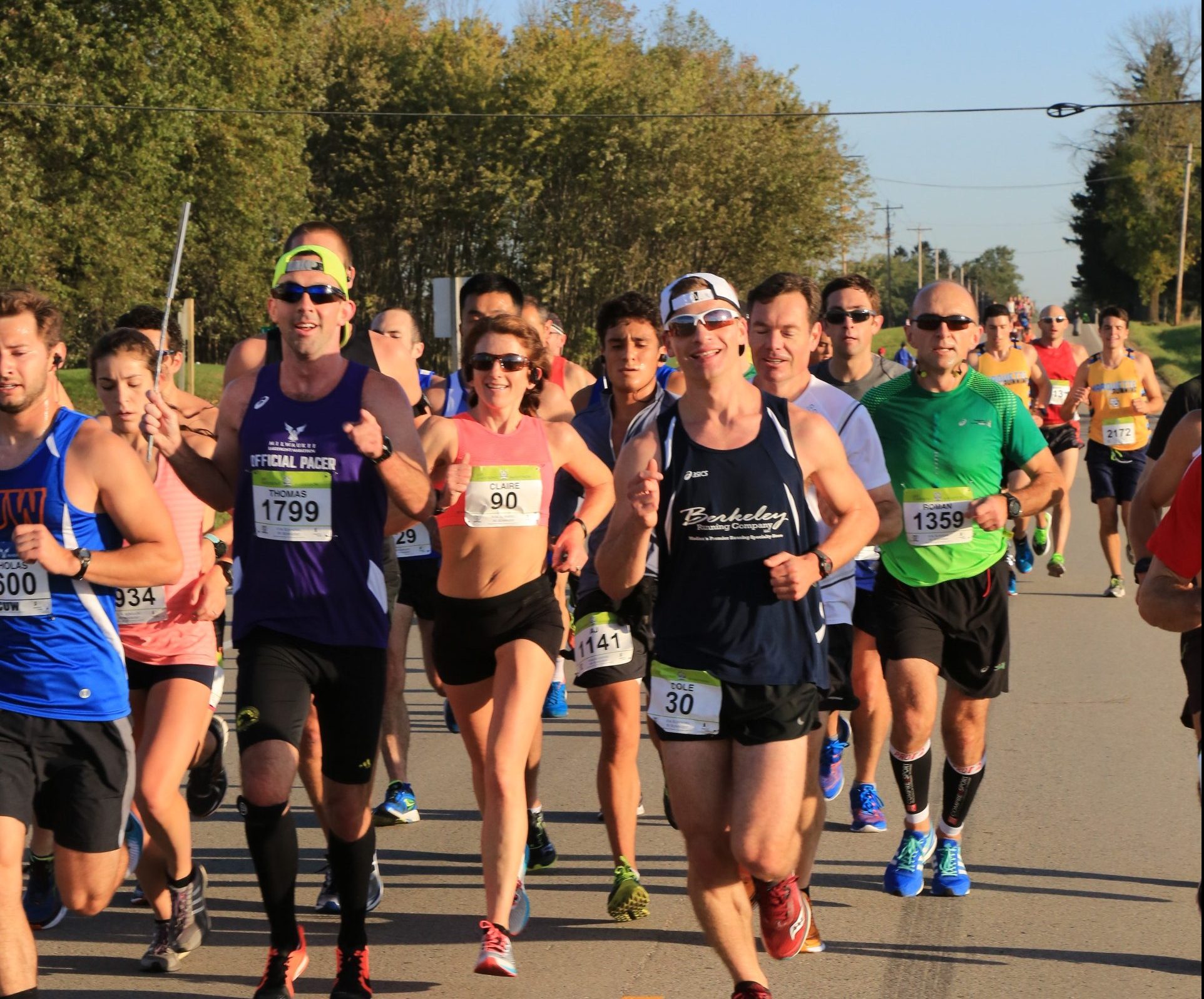 I imagine I now know how Eliud Kipchoge felt when he didn’t quite break the two-hour barrier last May coming in at 2:00:25.

While I still don’t have that 2 next to my name, I’m still so happy and proud.

When I heard that the forecast called for mid-50s-60s and a 20mph headwind, I have to admit, I was nervous.  The temperature was a little warm for good racing, but not terrible.

But the headwind?  That’s like running through molasses. (Here’s how much the wind will affect your pace.)

Then I remembered that the race planned to have a 3-hour pace group.  Those are a bit hard to find in smaller races since you have to be a lot faster than that to be able to lead a group comfortably, so I hoped I could just tuck in behind the pacer and draft.

Turns out there was a big pack of us and we stayed in a tight formation for 23 miles.

Before the race, I was careful to eat and drink everything exactly the same way I had done in January at the Charleston Marathon since it worked so well.

I had prepared two bottles of my lemonade starch fuel but this time, I used 60g of tapioca starch instead or corn starch and added 10g of corn syrup for glucose with 5g of powdered fructose.  Each 8oz bottle contained 275 calories and 67g of carbohydrate.

But just like Charleston, I ended up only using one.

When I found out that Thomas, our pacer, was a 2:35 marathoner, I decided to ignore my watch and just blindly trust him.  I knew I would need a pack to brace against the wind as well as the mental relief of not having to worry about pace.  He told me at the start that he planned to run even splits which is what I wanted.

This is a flat course with a slight downhill so aiming for negative splits (second half faster than the first) had a big risk of backfiring.  Not to mention, I’ve never, ever run negative splits, so I wasn’t going to start now.

I occasionally checked my watch, but mostly ignored it.

The pack of 20 or so runners was so tight that we occasionally bumped elbows or clipped each other’s heels.  As I bumped the guy in the navy singlet next to me for the third time, I said, “I’m just going to apologize now for the whole race!”

This stretch of the race weaved through cornfields with dairy cows mooing at us in the early golden light.  We crossed the 10k timing mat and Thomas said we were right on target.

I try to avoid doing any kind of math when I’m running hard, so I took his word for it.

The pace was feeling fine and I was taking sips of my drink every other mile or so.  I was sure to grab a cup of water at each aid station and it turned out to be like a well-choreographed dance as each member of our pack held out an arm to grab a cup from a volunteer.

Coming through the half with nearly perfectly even splits was certainly reassuring.  As a coach, I so often talk about running negative splits, so there was a little twinge of wondering if the pace was too fast, but I let that thought evaporate as quickly as it popped up.

Looking at it later, wow, mile 15 was fast!  Good thing I wasn’t looking at my watch or I would have slowed down!

At this point we were winding through oak-lined neighborhoods of beautiful historic homes.  Our pack had grown smaller, but was still about 10 people.  The two other women that started in the pack with me had faded.

The pace was still feeling fine for me at this point, but the wind was picking up.  I allowed myself to wonder what would happen if I could speed up in the last 10k.  But I knew I didn’t want to lose the wind protection and the mental boost of the group so I stayed put.

I was really happy that I felt as strong as I did after crossing the 20 mile mark.  I warned myself not to get too excited because there was a long way to go.

At mile 23, I even started wondering if now was the time to leave the pack and speed up.  I didn’t want a 3 hour time, I wanted a sub-three!  But I knew as we left the protection of the neighborhoods and headed down to the beach, the winds would be in full force and I didn’t want to be alone for that.

Little did I know…

At some point Thomas mentioned there would be a good downhill at mile 24 before the flat beach and that last year he had taken the group 30 seconds too fast through it.  I quite liked that idea, but just before we got there, the pack started pulling away.

I thought that I was slowing down, I had no idea that they were speeding up.

I lost contact with them even though I was running a sub-three-hour pace.  I just didn’t know it.

So by the time I got down to the lake, I was all alone.

The full force of the 20mph headwinds hit me like a brick wall.  One of the bike support volunteers (you can see her shadow in the picture above) told me that I was in third place.

Convinced that the pace group minutes ahead of me was on pace and I had fallen behind, I struggled to run as hard as I could the last two miles.  I was not giving up and I do not think I could have run any harder than I did at that point.

I asked the biker if there was any woman behind me.

As I entered the finishing chute, I gave it everything I had and I was shocked to see how close I actually was to three hours.

When I talked with my coach, Jeff Gaudette, I told him I was worried that not taking in enough fuel played a big factor.  He said that probably wasn’t the case.

“When the pack pulled away from you,” he said, “you thought your goal was shot.”  I subconsciously slowed down, even though consciously I was fighting as hard as I could.

Obviously, had I looked at my watch, I would have seen where I was, but at that point, I felt it didn’t matter.  If I was running as hard as I possibly could go, what did the time matter?

Had I realized that I was not only on pace, but under pace during mile 25, Jeff told me, I would have gotten a shot of confidence and adrenaline that could have taken me to the the finish line just a little faster.

I’m also not in the habit of looking at overall time on a run.  I look at pace, mile splits, and distance and ignore everything else.

Heck, if I simply had just the time of day showing, I would have known how close I was!  Something to remember for next time. 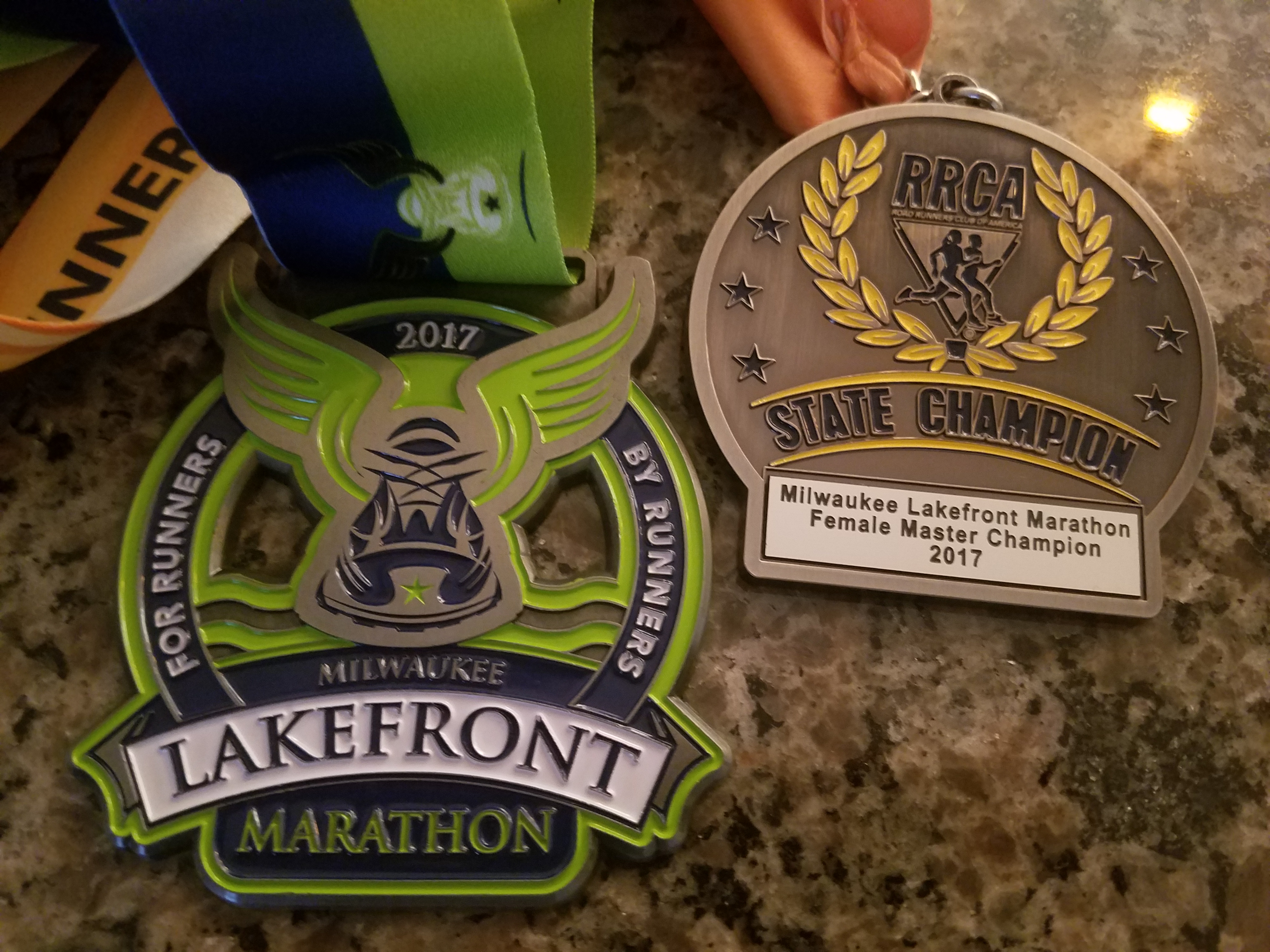 But overall, I am thrilled with this race.  I ended up finishing in 3rd place and I also have the swanky new title of being the 2017 Wisconsin State Female Master’s Champion!

Yes, of course I do.  But this is still pretty good.