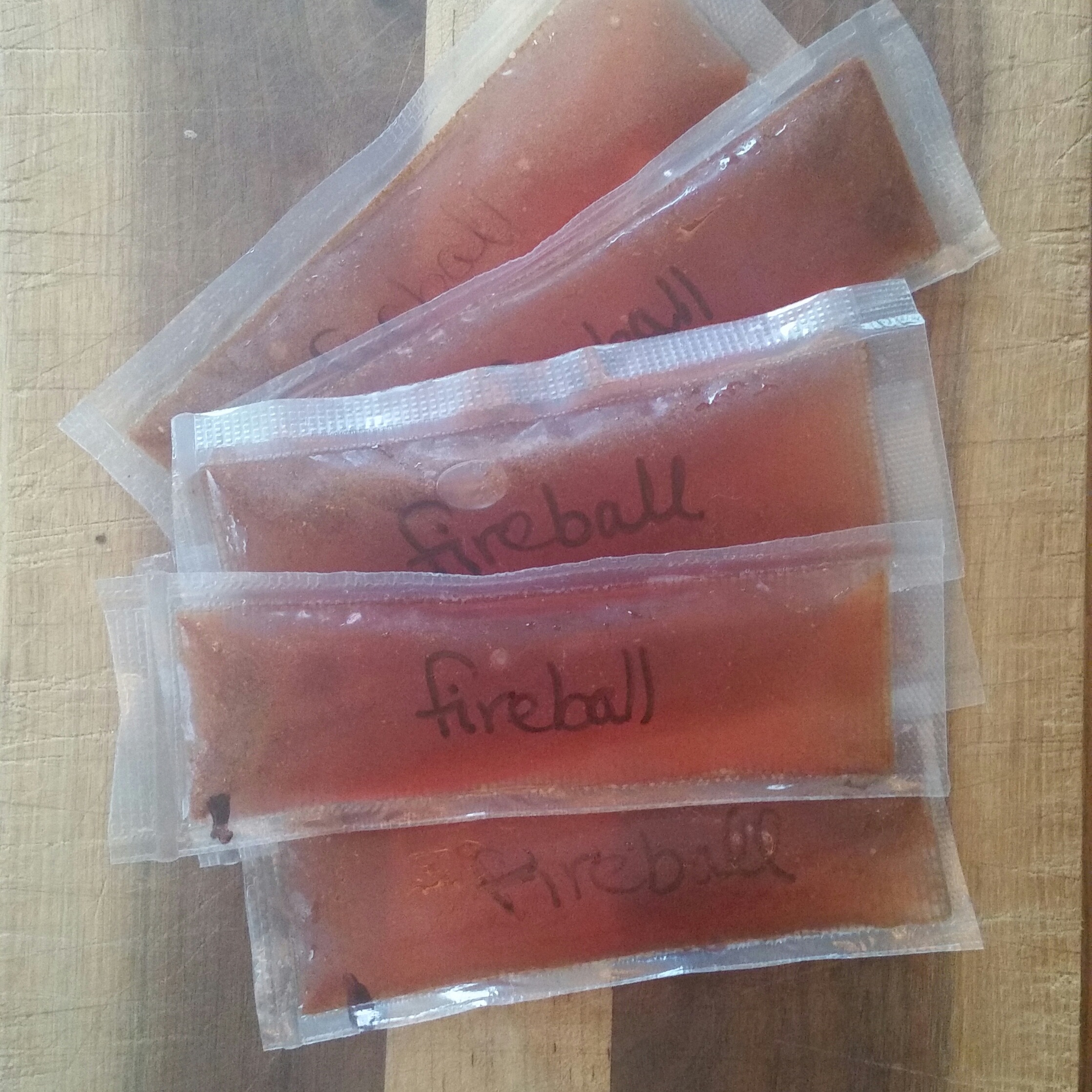 I don’t get cramps very often when I run or race, but when it happens, it can quickly turn a nice run into a miserable suffer fest.  I started doing a little research online about what works to stop them.  Pickle juice, mustard, salt, water were all touted as cures, but I wasn’t really sold on filling a gel flask with mustardy pickle brine for my next race.  Stuffing a pickle in my pocket during a race, while an amusing image, is not exactly the route I want to go.

A couple of entrepreneurs came up with a product called “It’s the Nerve,” which is now called Hot Shots.  Their research found that it’s not dehydration or lack of salt that causes cramping; it’s the nerve controlling the muscle that causes it.  The key is to trick the nerve into calming down and for some reason, spicy or vinegary foods does the trick.  Apparently, Hot Shot is a concoction made of cinnamon, ginger, and cayenne.

So of course, I had to make my own.  Putting it into a gel that I would be consuming anyway seemed like the best choice.

At Boston this year, I started cramping at mile 2, much earlier than I ever would have imagined.  I took a Fireball gel and the cramp was literally gone in a few minutes.  It worked! 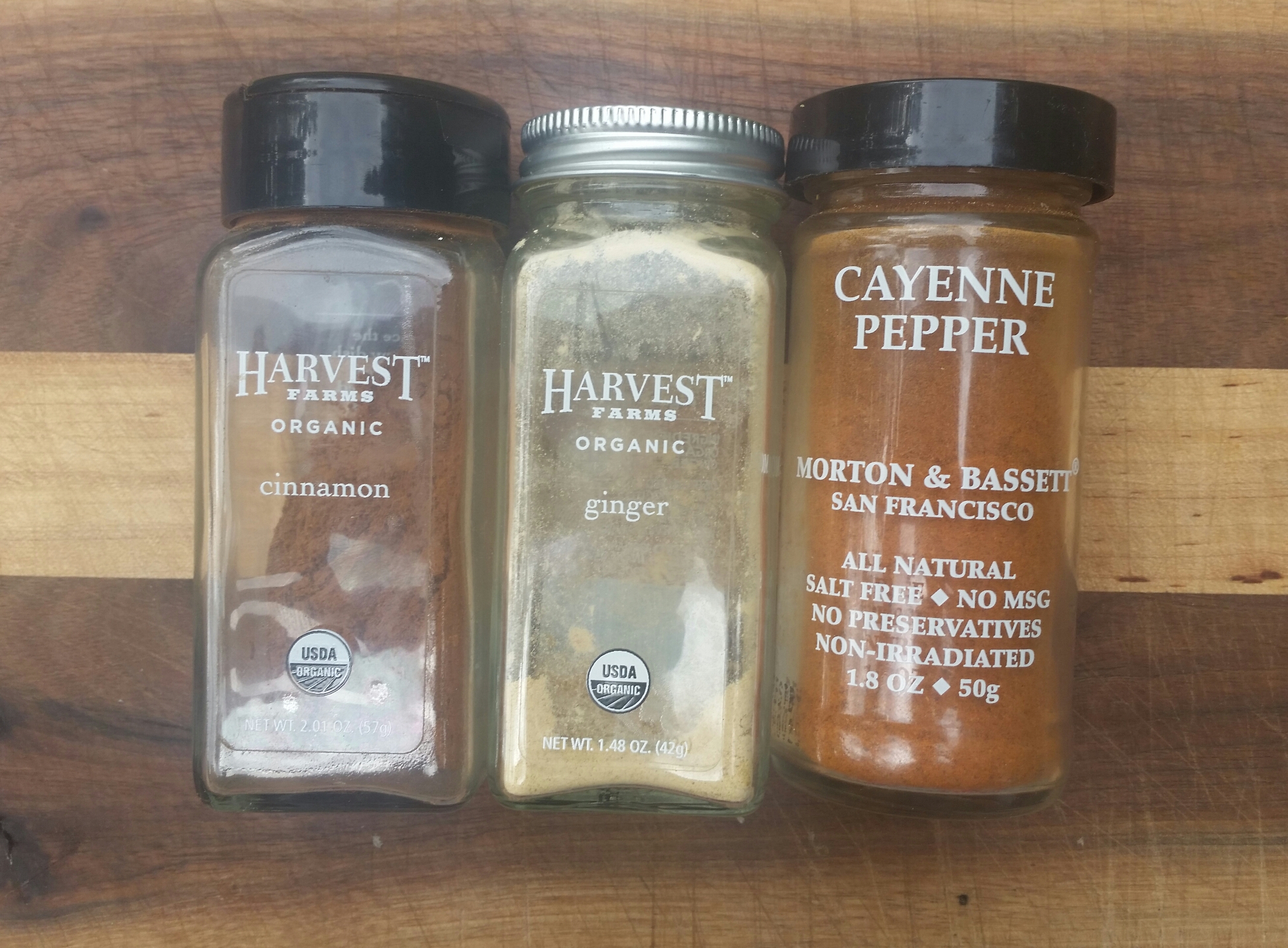 I had been experimenting with gels for a while and still like the real food gels like make like the Brownie Batter gel. They have a thinner consistency than many store-bought gels, they taste great, and they are real food.  But there were two issues that I didn’t like.  First, it’s hard to blend the fruit perfectly and little bits would clog up my gel flask.  Second, these gels are brown.  That might sound trivial, but imagine spilling a little brown goo on your shorts, your leg, or your shoe while racing.  No matter how much you tell people, “it was my gel!  I swear!” your race photos will tell a different story.

But wait a second.  Was I really thinking of using highly processed corn syrup and agave for a homemade gel?  What about my whole foods philosophy?  I run and eat for my health!  This is exactly opposite of that.  Yes.  It is.  But I’m okay with that.  One of the reasons I race is to bring the best out of myself and on race day, and simple sugars are the best way to achieve that.  Matt Fitzgerald explains it better than I can here.

The gels I came up with turned out even better than I’d hoped.  With the addition of salt and a tablespoon of fruit juice, I created gels reminiscent of my favorite cocktails:  Limoncello, Margarita, Cherry Bomb, (I’ll post recipes to those variations soon!) and the anti-cramping Fireball.  Instead of being thick and pasty, they slide smoothly down in one or two swallows.  Each 92-calorie gel has 23.5 grams of carbs and 54.3mg of sodium.  That’s comparable to the Citrus Clif gel which has 100 calories, 24 grams of carbs, and 90mg of sodium.  (I am not a particularly salty sweater, so I prefer my gels to be not so salty.  If you are, double the salt in my recipes or add some baking soda.  An eighth of a teaspoon contains 157mg of sodium.

A gel flask is a good way to carry your gels.  I like Ultimate Direction’s 4oz gel flask, but if you are flying to a race, remember that you can only carry 2 ounces of liquid on a plane.  There are some good food-friendly silicone travel bottles on the market that are inexpensive and work well.  But an issue with flasks is that they are bulky and you might want something lower profile.  You can use Ziplock bags and bite the corner off, or you can get super fancy and make your own gel packets with a FoodSaver.  This has been my method lately.  I’ll mix up a big batch of gels and create small packets, fill and seal them (no need to vacuum) and label them.  Then I make a small cut in the side, being careful not to cut through the seal, and mark the cut with the Sharpie.  That way I can see at a glance where to tear open the packet.

These are obviously a bit spicy, sort of like a Fireball candy, but they work!

Click Here For Full Nutrition, Exchanges, and My Plate Info