Well, that was fun!  Normally, I don’t describe racing or even running in general as “fun.”  Most of the time, running is just good ol’-fashioned hard work.  I get a sense of accomplishment, it gives me a good body-cleansing sweat, and it feeds my need for self-improvement. I love running, but I’m not the type of person who says after a run, “whee!  Now that was fun!”  But this race was actually fun.

(Okay, the first two miles were fun.  The last mile was a lung-burning, deceptively difficult mental battle.  And let’s not even talk about the last tenth of a mile.  So if you want to get technical, let’s say 67% was really fun.)

I chose this race because I love running downhill and I was hoping for a nice PR course to see what I could do.  Veena, Nate, and I had jogged the course earlier this week and I’m so glad we did, because it didn’t seem all that downhill.  It was more of a gradual decline along Old 70 with a few little rises, ending in the town of Black Mountain with a very short, but fairly steep uphill finish.  “This is supposed to be downhill!” Veena complained.  “It’s a misnomer!”

What we didn’t see on that practice run was the actual starting line.  It sat on top of a ridge in the steep parking lot of the Ridgecrest Conference Center.  The first tenth of a mile was about as steep as a ski slope. 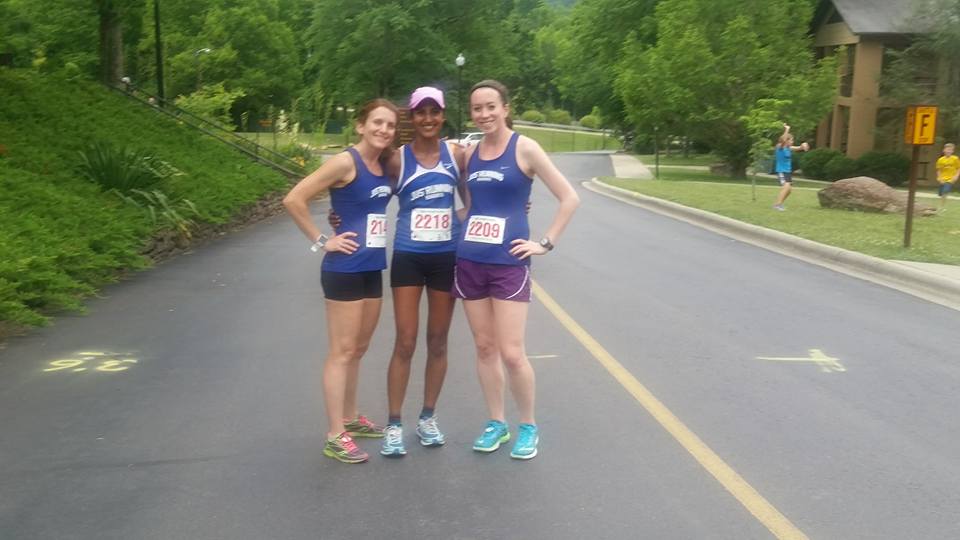 Me with Veena and Megan before the start. You can see the 80% humidity in the air!

We knew we had to careful on that first descent and hold back and we promised each other we wouldn’t go out too fast.  Megan was definitely the best at that.  Veena and I barreled down the parking lot and I really tried to stay conscious of not going full out.  Some guy near us was racing in modified flip flops and all I could hear was the smacking of his feet on the pavement every step.  Thwhack, thwhack, thwhack!  “That’s not annoying or anything,” Megan commented.

As we turned onto Old 70 for the straightaway, I looked at my watch and it said 5:25 pace.  Stupidly unsustainable.  Veena was still accelerating as I called out our pace and I had to let her go.  That is the hardest part of the first mile of a 5K.  You have to be conservative even when people around you are passing you.  By mile 1,  Megan and I passed Veena and were in third and fourth place for the women. Mile 1:  5:47.

For the next mile, Megan and I were shoulder to shoulder.  We are pretty evenly matched and had talked about racing together to support each other.  We were running well and both of our breathing was even.  We were even gaining on the second place woman ahead.  “Let’s catch her,” I said.  I started to try to speed up and Megan was with me for a few steps and then dropped back.  “You can do it!” I encouraged her.  But she lost some ground and I had to keep going.  Mile 2:  6:11.

The last mile has a couple of baby uphills that you have to crest before getting a gentle downhill.  I tried to stay strong, keep my speed on the ups and open up on the backsides, but I was running out of downhill.  My legs felt halfway decent, but my lungs were starting to burn.  Relax, deep breath, relax, I told myself.  I was slowing, but my effort was just as high so there was never a clear awareness of how much I was slowing, but it soon became obvious as I made the turns into town. A quick glance over my shoulder told me Megan was not too far behind.  Mile 3:  6:43.

The last tenth of a mile has two very short, but very steep hills that I was psyching myself up for.  I did the best job I could, but there was no kick left in me.  Arek was at the finish line screaming, “Let’s go, Maggot! Leave it all out there!  Kick!!!”  Last tenth of a mile:  7:36/mile pace. 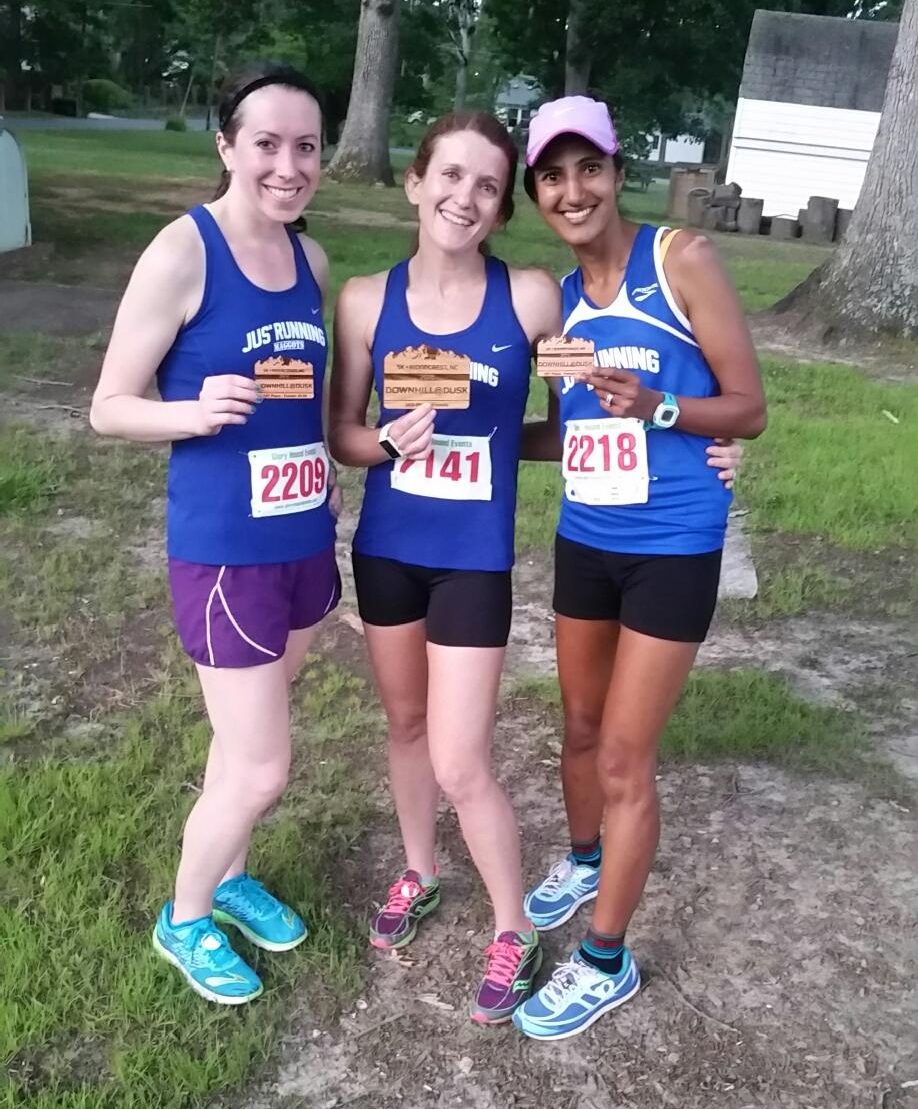 I was able to hang onto 3rd place female, 8th overall, and got a 21-second PR with 19:33, 6:17/mile average pace.  Megan and Veena both won their age groups with 4th and 5th place.  Veena PRed and Megan got her North Carolina PR.  They both did a great job.

So I obviously need to work on my third mile and my kick.  The last mile will always be the hardest of any 5K and I need to be better prepared for it mentally.  But the nice thing about this race versus the EarthFare 5K two weeks ago is that the pain of the race started much later this time.  If I can just push that red line of pain further and further down the road each time, I can keep getting better at this distance.

And maybe I”ll even have some fun!