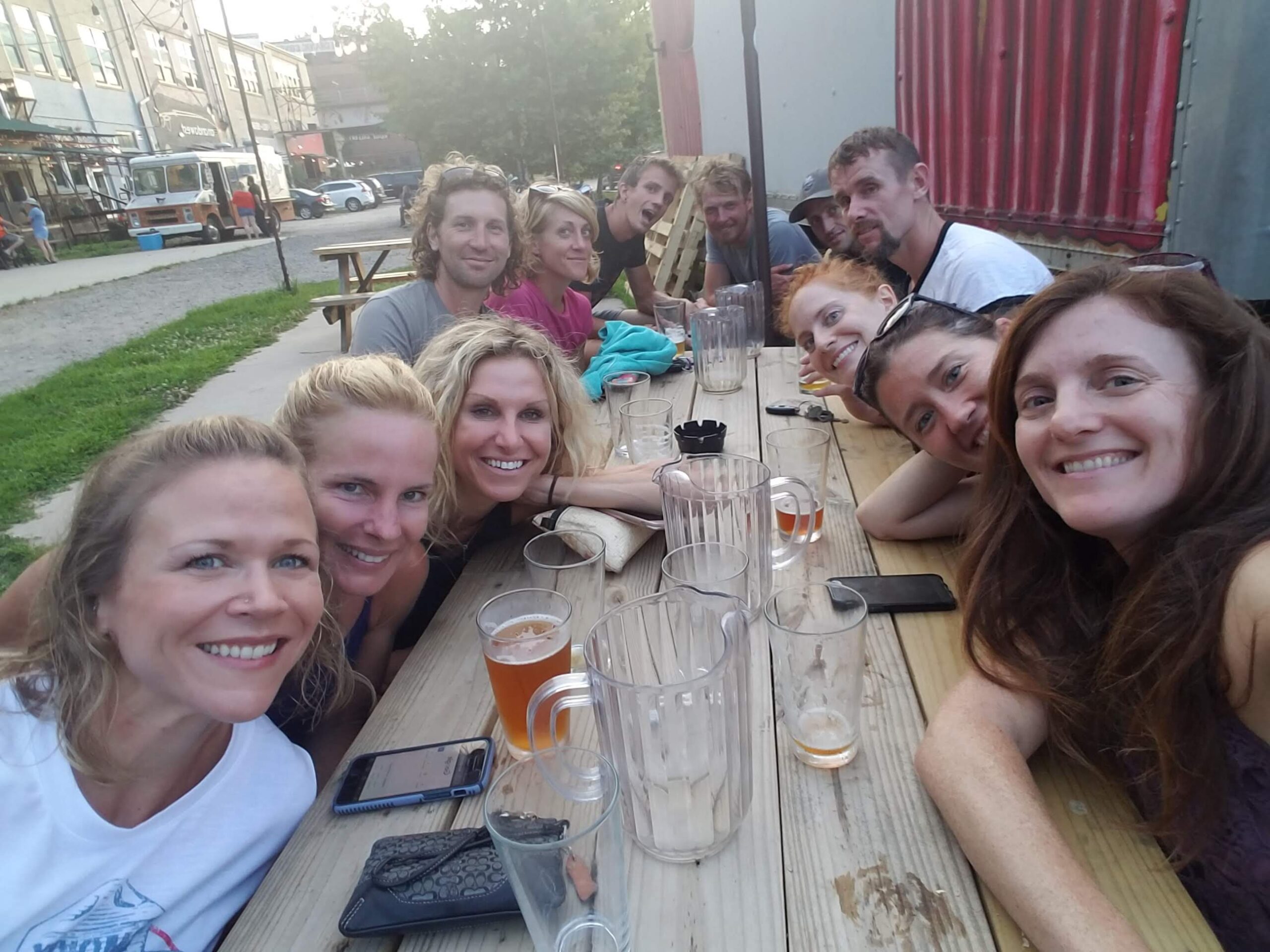 It’s the end of January as I write this and if you’ve been like me and kept the month dry of alcohol, you are probably (like me!) looking forward to February. In the past, going without alcohol had always been strategically timed for the month ahead of a marathon. As a coach, I now I recommend the same practice to my athletes.

Why? Because it works.

As runners who care about performance and improvement, we are always looking for the latest and greatest technique, supplement, or product out there to give us a training edge.  We drink beet juice, buy shoes that promise to make us 4% faster, and analyze our steps per minute looking for tiny ways that we can hack ourselves into becoming just a little better.

More often than not though, it’s the big picture things that matter the most, like good, consistent training, good rest and sleep, and good nutrition.

And for many, not drinking for a month will improve sleep, help you recover faster from your workouts, help maintain or even lose weight,  feel better every day, and even save you money!

The truth is, even moderate drinking could be holding you back from your best performances.

This is a really fascinating topic to me because alcohol is so prevalent in our society even though we all know that it’s not good for us.  It’s complicated because we use alcohol to celebrate, commiserate, and unwind after a hard day.  And nothing tastes better after a long, hot run than an ice cold beer.

Most of us work hard and run hard and enjoy drinking in moderation.  Nothing I could possibly say is going to change some people’s minds and that’s not my goal here.  I enjoy a nice glass of wine myself, but I have certainly noticed that alcohol affects me a lot differently than it used to when I was in my 20s, so at least for me, I am open to learning as much as I can about it.

It’s pretty safe to say that most people would agree that closing down the bar the night before your marathon is not a great idea.  Being tired, dehydrated, and hungover at the starting line can’t be great for performance.

But what about moderate consumption?  Maybe not the night before the big race, but in general?

The Centers For Disease Control say that moderate drinking is defined as one drink a day for women and two drinks for men.  And some people really do stop after just one or two drinks and that is true moderation.   Others choose to have 3 or 4 or 5 or more, then abstain for a day or more before indulging again, which is technically not moderation, but bingeing, even if you stay within the weekly threshold of moderation.  According to the CDC, two thirds of the drinkers in the US do not drink moderately.

Heavy drinkers are at risk for alcoholism, increased risk for many types of cancers, stomach ulcers, weight gain and all its associated health problems, bleeding in the intestinal tract, liver disease, and more, not to mention motor vehicle accidents, poor decision making, and countless ruined marriages.

Now, I would argue that most runners, especially those who are really invested in health and fitness, are not typically heavy drinkers, but simply like to enjoy a beer or two with friends a few times a week.  Is there any harm in this? Let’s take a look at the effects and you can make that call for yourself.

One of the most powerful things that alcohol does is rob you of deep sleep.

While a drink or two might help you fall asleep faster, the sleep that you do get is less restorative.  In fact, alcohol is one of the most powerful suppressors of REM sleep known to science, that deep dream sleep that you need to process memories.

According to Harvard sleep scientist Matthew Walker, “people consuming even moderate amounts of alcohol in the afternoon and/or evening are depriving themselves of dream sleep.”  Chronic lack of sleep not only makes you tired, but it reduces your motor skills, endurance, time to exhaustion, impairs your cardiovascular, metabolic and respiratory capabilities, as well as your ability to cool yourself through sweating.

Here’s a secret – sleep is the best performance enhancing tool out there.

Another well-known impact of alcohol is dehydration.  It’s a diuretic so your body pulls water from your cells to metabolize it, when it could be using that on-board water to cool your body through sweat, so be sure to drink extra water when you drink alcohol.

Perhaps a lesser-known affect alcohol consumption has is that it creates inflammation in the body and it increases swelling. There’s been a lot of discussion in about inflation these days so this is important. This process can increase your risk of injury, decrease your body’s immune function, which then can contribute to delayed healing of existing injuries.

In other words, inflammation can silently make you sick.

Then there is the caloric cost of alcohol.  That frosty IPA can set you back 200-300 calories or more and let’s face it, you are a lot less likely to choose a salad instead of the loaded cheese fries when you’ve had a few microbrews.

Indulging every once in a while is perfectly fine in a healthy runner’s diet, but if you are trying to stay fit and trim, alcohol is not your friend – it’s a double whammy.

Long term problems with chronic alcohol use is that it can impair your body’s ability to process glycogen in the liver, which we know is the body’s preferred fuel for running fast.  That will not only hurt your running during your run, but will slow the recovery process down afterwards.  And while your liver is busy processing alcohol, its ability to clear lactic acid built up from running is impaired, causing you to slow down before your true fitness says it should.

In other words, when alcohol enters your body, getting rid of it is your body’s number one priority at the expense of everything else.

But let’s get real here.  Most runners are not taking a shot of vodka before their daily run, so is your body really still processing the alcohol you had last night during your run the next day?  According to the CDC, it takes about 72 hours after overconsumption for your elevated heart rate to go down to normal along with your performance ability.  It seems logical that it would take less time to return to normal after moderate consumption, but advanced urine tests can detect alcohol in your system anywhere from 48 to 80 hours after your last drink.

Now that we’ve talked about how alcohol consumption before running affects you, what about after?  It seems that nearly all races have a beer tent set up and some races even give you a free beer with your entry.  What’s the harm in that?

Well, again, dehydration is back into play.  After a race you are already dehydrated, so choosing a beer before water will put you further into a dehydrated debt, so if you are going to imbibe, down a bottle of water first.

Alcohol after an intense effort can also interfere with your body’s glycogen replenishment and muscle repair.   Remember that getting rid of alcohol is your body’s first priority, so creating glycogen is going to be off the table while your liver is preoccupied with that frosty brew, which delays recovery.  Not to mention beer is protein-free, so it does nothing to help repair damaged muscles.

So obviously, zero alcohol is the healthiest choice, but if you are going to treat yourself, how much is too much after a hard-earned race?

A 2014 study in the journal Sports Medicine found that for most people, a dose less than half a gram per kilogram of body weight is ideal to prevent stalling recovery.  So let’s do some math:  A standard “unit” of alcohol contains about 14 grams of alcohol.  A unit is defined as either : 12 ounces of 5.0-percent beer, five ounces of 12-percent  wine, or 1.5 ounces of 80-proof liquor.  A 150-pound runner is 68 kilograms; so that runner would want to consume less than 34 grams of alcohol, or 2.42 units of 5-percent ABV beers, to keep recovery optimal following a run.   And that’s assuming that you know how heavy your craft beer is, because many are higher in alcohol (many IPA’s are north of 6.5%)!

To simplify, one or two drinks after a race, depending on your size, preferably after you have had some water and some food is probably not hurting you too much.

There is a reason that alcohol is so embedded in our society.  It makes us temporarily feel good, despite the cost that you might have to pay for later.  I’m not saying that all athletes should give up alcohol forever, unless that’s your choice, but knowing how it affects your before, during, and after your training can empower your to make the best choice for you and your running.