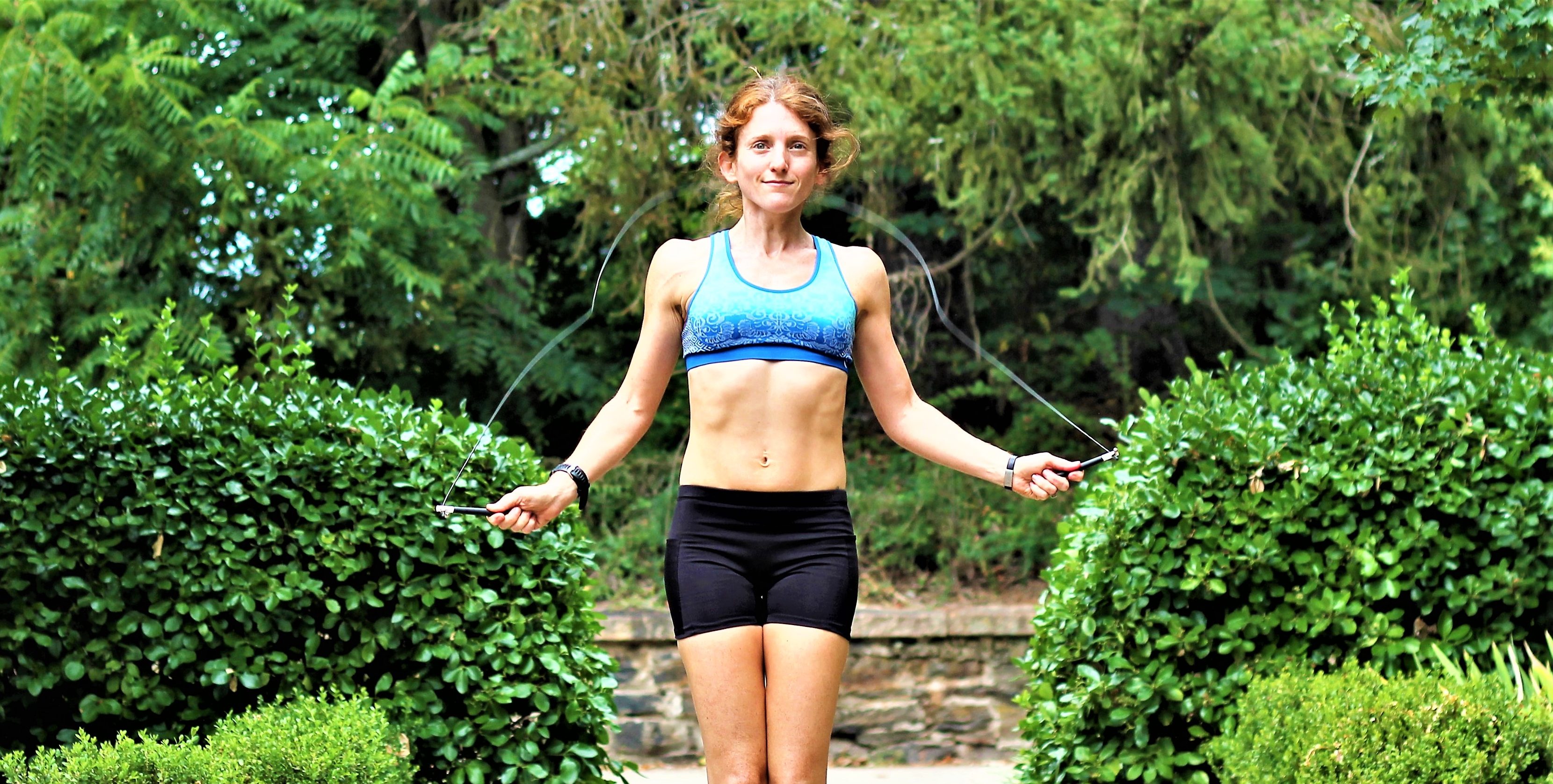 What if I told you there was a way to improve your speed, agility, power, endurance, balance and coordination in just five to ten minutes a day, three times a week?

And not only that, it would be fun?

Most runners are always looking for a way to get stronger and faster.  More running usually is the best way to do it, but there’s a limit to how much running you can do with your body and your lifestyle.

This is where plyometrics come in.  Plyos are high-velocity movements that generate power which translates to more speed and stamina on your runs.

In other words, jumping.

Studies have shown that adding plyos into your weekly routine improves muscle strength and running economy.  One study of highly trained athletes showed that after 9 weeks of plyo training 3 times a week, elite runners increased their running economy by 4.1%!

Does that mean that you have to do a million burpees and box jumps to increase your power?  Those are great, but there’s a more fun way.

Jumping rope works all the major running muscles (calves, quads, glutes) as well as your stabilizer muscles (core, shoulders, back and chest) used to turn the rope.

It also increases the elasticity of your Achilles tendon, making it a great choice for runners prone to this common injury.  When you jump rope, you strengthen your feet, ankles, and calves, which all support the tendon.  You are training your feet to land properly, avoiding some of the alignment issues that can cause Achilles tendon pain.

As far as calorie burning, jumping rope is roughly equivalent to running, but there’s no way you can keep it up as long!

The first thing you need, obviously, is a jump rope.  But don’t get one of those old-school ones that are actually made of rope or covered in plastic rigatoni noodles.

You need a speed rope. They cost less than $10.  The thin cable is easy to turn fast so you can spin the rope quickly. 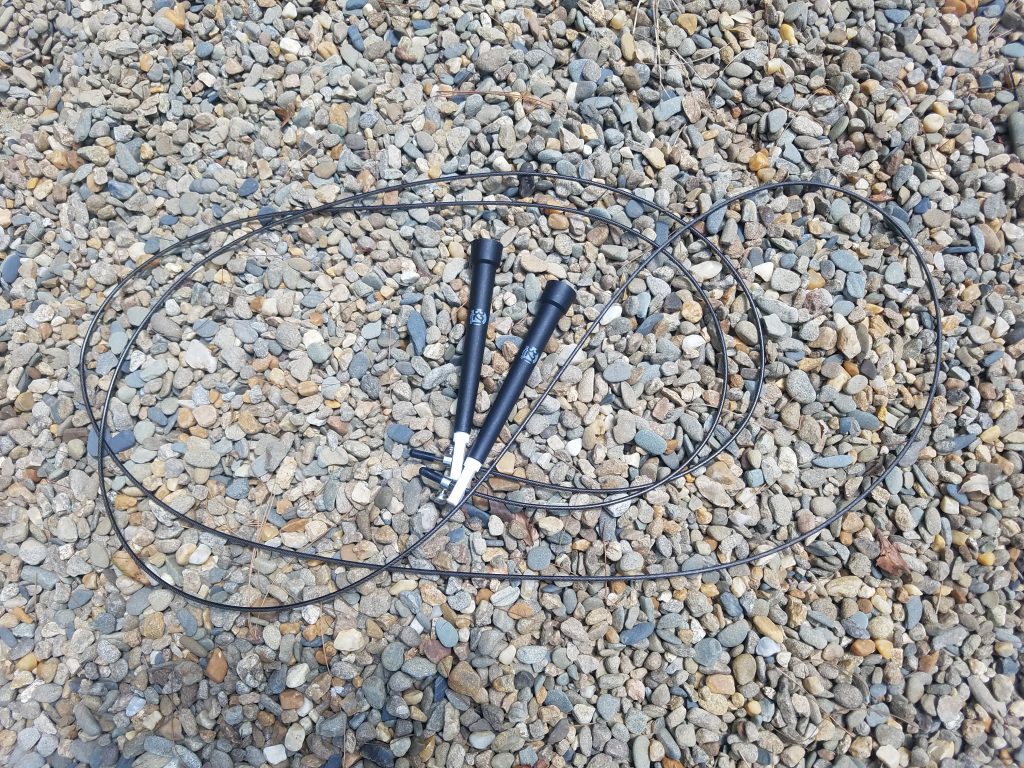 Here are a few pointers to getting the hang of it if you haven’t jumped rope since the fourth grade.

Keep your arms low on your sides and turn the rope with your wrists only, not your whole arms.  You want to jump exactly once per rotation and avoid that “double bounce” thing that a lot of people do when they start.  In order to do that, it means you need to spin the rope quickly so that it passes under your feet in time. 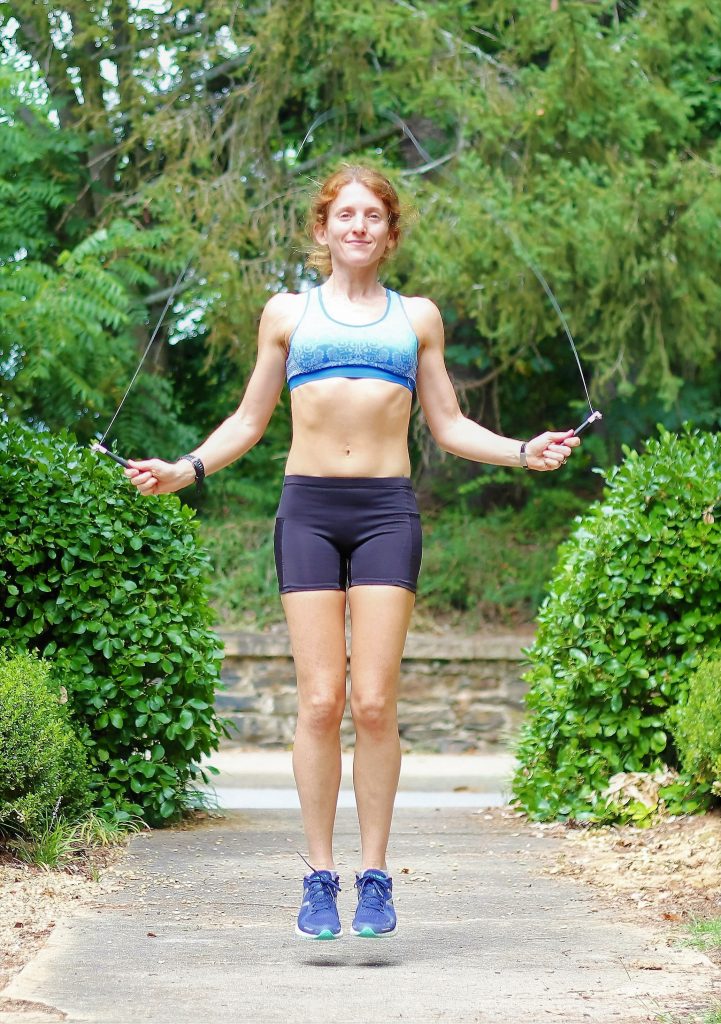 You’ll need to have great posture with your core tight and your shoulders down and back in order to jump rope smoothly.  Just like running!

Be sure that you are landing and taking off on your forefeet.  Don’t crash down flatfooted or with your heels.

A great routine to start off with is one I borrowed from pro athlete Sarah Brown.  Often sidelined with Achilles injuries, Brown and her coach had to come up with ways for her to get her explosive speedwork in without so many risky sprint sessions on the track.

Her routine is 10 jumps with both feet, 10 with only the left, 10 with only the right, and then 20 jumps alternating feet.  Aim for 3 to 5 sets of these allowing for short rests in between sets if you need it.  The entire thing takes less than 10 minutes and is perfect right after an easy run.

When you get bored with that, add in some high knees, jacks, front-to-backs, and side to side moves. Have fun and play with it!

There are tons of jump roping videos on YouTube and here’s one that talks about all the benefits from a super fit dude that can do all the tricks! (Or mute it if you just want to watch a buff guy jumping on the beach!)

I keep my jump rope right next to the front door and after I get back from a run, I’ll grab a drink of water, and then jump for a few minutes.

Of course, just like with running, you can get carried away with too much of a good thing.  If you go too hard too soon with your new toy, you’re going to end up hurt, so go easy on it at first.

The routine I’ve described is fairly low impact since you are only jumping a few inches off the ground, typically much less than you would running, so you can jump rope several times a week without adding much more stress to your training.  But add a heavier rope, throw in some double unders, and you are changing this into a high-impact exercise that requires recovery time, so be sure to factor that in.

For now, I’m just keeping it simple as the marathon miles are starting to add up.  But if a few minutes a few times a week are all it takes to make me a stronger, more powerful runner, then I’ll take Van Halen’s advice and jump!

Lift Slow, Run Fast: How to Build Strength for Runners