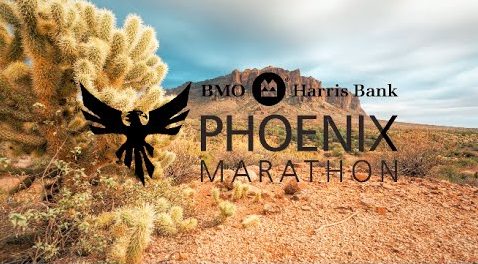 So What’s Next? Phoenix in February!

When you are dating someone seriously, the question people always ask is, “So, when you are getting married?”

Once you get married, they ask, “So, when are you having kids?”

Once you have a kid, they ask, “So, when are you having another one?”

And when you finish a race, naturally the first question is, “so, what’s your next race?”

I had purposely not had any plans for after my October 1 marathon.  I wanted to focus on the race and depending on how it went, make a decision after that.

I had joked that if I got my sub-three time I was shooting for, then I could die happy and never have to race another marathon again.

But I didn’t quite get there…

Like I mentioned in my race recap, I’m thrilled with my 6.5 minute personal record, but it really is just a little bittersweet to be just thirty seconds away from cracking the big three.

So I have chosen to build on my fitness and race sooner rather than later and I picked the Mesa Phoenix Marathon on February 24!

The road to Mesa

Here’s why I chose this one:

Here’s a very quick video of the course:

But I do have to admit that I had a few hesitations signing up for this one.

I had this nagging voice inside my head telling me that running a downhill race for a PR is cheating.

It’s not, of course, since downhill courses are not automatically easier for everyone.  While gravity makes running easier on your lungs, downhills beat up your quads, especially if the descent is early in the race like this one, which makes the finish tougher than an entirely flat course.

And this course is not simply falling off a mountain like many of the big downhill courses like my first BQ in Utah at Big Cottonwood which dropped 4000′ from start to finish (the new course drops 6000′!)

But it’s enough of a drop that this course, while a Boston qualifier, could not be used to qualify for the Olympic Trials.  No course with a drop of more than 3.25m/km (about 447 ft) counts.

I did consider racing the Rock N Roll Arizona race in January in Phoenix instead, however, just so I wouldn’t have to  wrestle with the “fairness” of a downhill course in my mind.  That course is nice and flat and is an OTQ course, so I could have gone with that one.

But January just felt too close to be able to fit in the training.

Ultimately, I decided that this is really a non-issue.

While I like to think my talents are limitless, I’m not foolishly optimistic to think that I can chop 15 minutes off my marathon time in four months and qualify for the trials.  I like to set big goals, but that’s just a little too big for even me!

26.2 miles is still 26.2 miles and it will be challenging no matter what the course.

But unlike Milwaukee, I will promise that I won’t sign up for another marathon right after this one.  Perhaps something for the fall of 2018, but no spring marathons.

It will be time to switch gears and try something new.

I’ll let you know after this one…