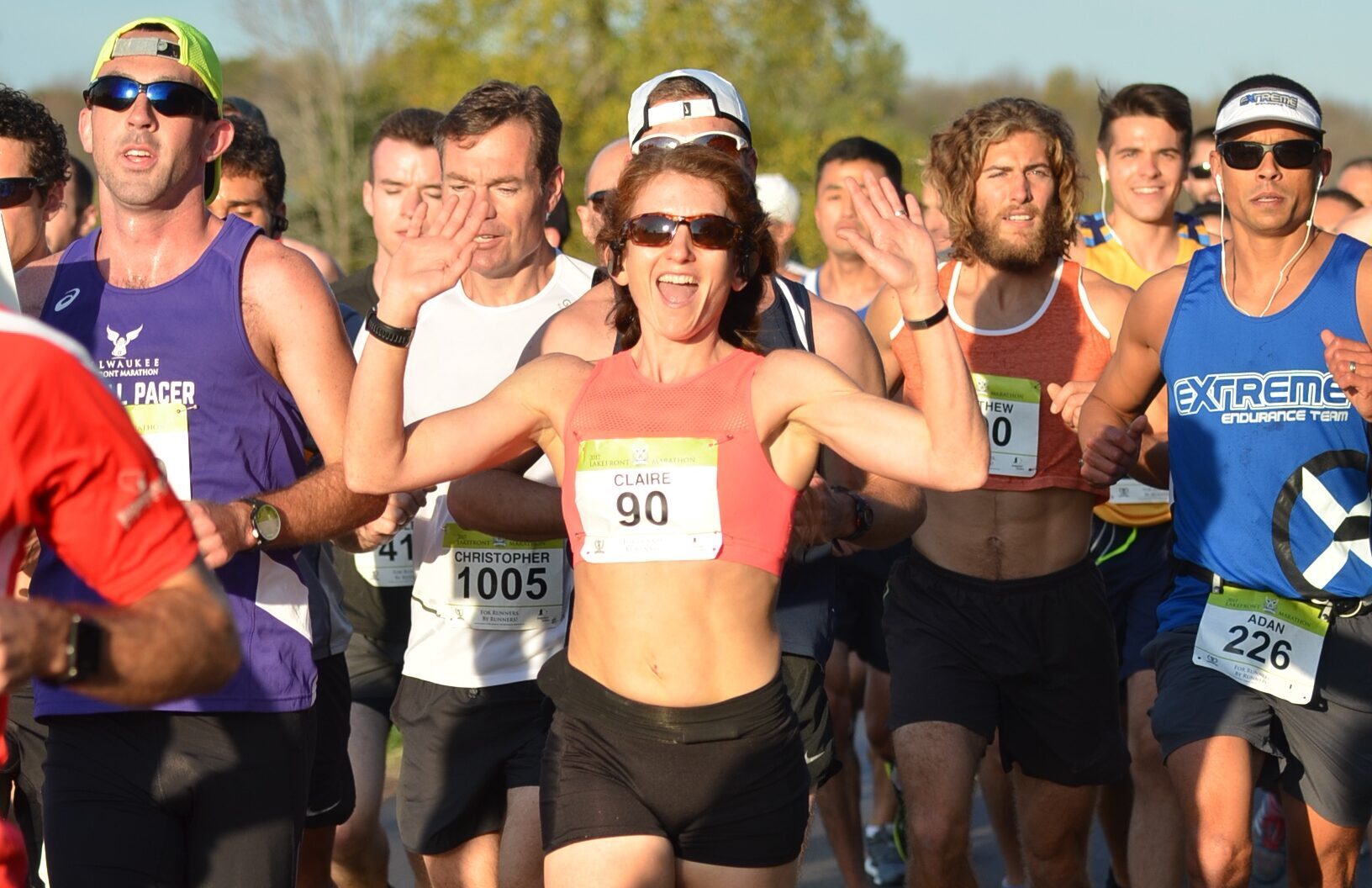 Avoid Stomach Pain on the Run

It’s no secret that running can be pretty rough on the tummy. There are few runners that have never experienced at least a little stomach pain on the run.

Just like your leg muscles, you can train your stomach to handle the rigors of running without getting sick. Here’s how to avoid tummy trouble on the run!

The Deal with Digestion on the Run

As you run, your body decides that you must be running away from a saber tooth tiger or chasing down a water buffalo for dinner so digestion on the run becomes less of a priority. So the blood that normally goes to the stomach and gut, instead gets diverted to the working muscles to power your run.

So whatever is left in your stomach, gets bounced around and digests much more slowly than it would be if you were lying on the couch. All that bouncing on a full or even partially full stomach can cause that uncomfortable feeling in your tummy.

Not every runner’s system reacts the same way, so you and your running buddy might experience different symptoms even with the same breakfast on the same run. Some runners can have more upper digestive symptoms, such as burping, reflux, nausea or even vomiting while others have mid- or lower-intestinal pain causing a very uncomfortable run and unexpected port-a-potty stops.

So runners need to learn what kinds of foods cause trouble on the run and what kind of timing of meals before runs work best to keep the belly happy. It’s pretty obvious that downing a spicy, extra large burrito immediately before a run is a high risk idea, but there are other culprits that might take a little experimenting to discover.

The first problem could be dehydration. If you are not properly hydrated, especially when running in warm weather, your stomach complaining might be the first sign. Remember that running causes blood to flow away from the stomach, so if you are beginning the run dehydrated, it will just get worse as you run.

Practice drinking plain water on your runs longer than 45-60 minutes, and even shorter in the summer.

Drinking too much can also cause tummy trouble on the run. If you are over-hydrated, the sloshing of liquid in your belly can be very painful, so make sure that you sip instead of chug and don’t drink too much. This can be a big issue in long races like the marathon, when runners try to stick to a pre-determined hydration schedule, that’s not based on what is actually happening in the moment. If your stomach feels like a water balloon, stop drinking!

Just as too much fluid is a problem, same goes with too much food. A normal sized meal will take 2-3 hours to digest properly, so be sure that you are not running right after a big meal. But you don’t want to run totally empty, especially when you’ve got a long run or big workout. So I recommend finding an easy to digest food that you can always eat in the hour before a run.

Popular choices are bananas, dates, a little juice, or some crackers. Having a go-to food can be really helpful on race day to pre-fuel your race, without getting full or having too much jostling in your stomach.

And that brings me to my next culprit and that’s trying new things before a run. That new gel that your friend uses or the latest energy bar might be a nice change if you always eat the same thing, but it can be an unwelcome surprise on your belly. So stick with what works, until it doesn’t!

Here’s my recipe for real-food gels you can make yourself. Or if you prefer a gel that is more like store-bought, but much cheaper, try this one.

Speaking of gels, they are notorious for causing GI issues, especially late in a race, along with popular sports drinks. The reason they work so well is that the sugar moves quickly through to the bloodstream, but if you don’t train your stomach to handle it, you might find yourself too sick to take in any more calories by mile 16. So be sure to train often with what you will use on race day to be sure what flavors and brands work for you.

I have found that sugar-free, starch-based race fuel works much better on my stomach. Here’s my classic recipe.

Too Much Protein, Fat, and Fiber

While too much sugar can be an issue, too much protein, fat, and fiber could also lead to trouble. These nutrients take longer to digest, so if they are still in your system during your run, your body might decide it wants to eject them as soon as possible. I’m not saying you should eliminate healthy plant-based foods in your diet, but watch how closely you eat fiber before a run.

If you have tried everything I’ve mentioned and you are still having issues, I suggest you get very detailed and start logging your food to see if you can find any clues. You could have a undiagnosed food allergy or intolerance or you could have a chronic medical condition like celiac disease or irritable bowel syndrome. Those conditions typically have other symptoms than just feeling sick on the run, so keep a journal of when you are feeling off to see if you can make a connection.

Eating After the Run

But what if you don’t typically feel sick on the run, but the thought of food after a run turns your stomach? You know that you need to get in recovery foods, but they are really hard to stomach for you right away.

The first thing to know is that you don’t have to force feed yourself right after a run. The idea that there is a very tight recovery window has largely been discounted by recent research, so try to at least get in a few sips of water immediately and then go ahead and shower and relax a little until your appetite comes back. You obviously don’t want to wait the entire day before eating again, but an hour or two isn’t going to make much difference.

It’s far better to eat real, whole foods when you are ready instead of forcing down a highly processed protein concoction just because you are trying to hit some magic recovery window that really doesn’t exist.

Here’s what to look for in a great, plant-based recovery foods.

Like almost everything running, you’ve got to experiment with what works for you and once you find something that seems to work, stick with it as much as you can. Because running is supposed to be good for you, not make you sick.

Ready to learn more? When you are ready to begin your plant-based running journey, let me know!